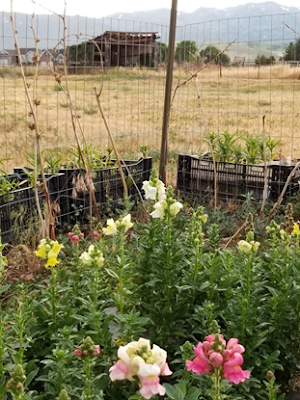 I’ve got a decision to make this winter. Rather shortly, as a matter of fact. Here it is:

How much of my flowers do I want to grow from seed myself and how many should I purchase as plugs?

If you’ve never heard of them, plugs are basically seedlings started by a commercial greenhouse. They arrive still very small, but should be ready to plant right out into your beds as soon as they arrive.

There are several factors that go into this decision.

Seeds are going to be much, much cheaper to buy. Your average seed packet costs around $3, and usually contains a significant number of seeds—25 or 100 or even more. The price goes down even more if you purchase a bigger quantity of seeds wholesale.

Plugs generally cost per plant. There’s a range with this too, of course, but on average they’re around $.35/plant. Still pretty cheap, right? Keep in mind that you often have to purchase an entire flat—too hard to split up flats between orders—and on top of that there are usually shipping minimums as well.

In terms of time, plugs are definitely the cheaper option. Maybe once I get it figured out better, my seed-growing won’t take so much time, but I’m telling you, growing those tiny green babies takes TIME! It’s not a sprint, either, it’s a marathon—particularly with the ones that take several weeks to get big enough to plant outside. That’s weeks of daily tending! Also, heaven forbid you take a vacation during that time—that would be throwing away all your hard work.

Plugs arrive at the point where you can pop them in the ground—from what I’ve heard. Right around May, when I’m looking at 4 trays of seedlings that need to be hardened off, having a tray arrive ready to go in the ground sounds pretty amazing!

Some flowers are hard to grow. Lisianthus, for example, has an entire Facebook group devoted to figuring out how to get it to grow from seed. As I’m still on 1st grade level seed growing, I don’t think I should attempt graduate level work quite yet!

I am fairly limited on space in my house. Until we can heat the greenhouse—even minimally—this one is going to be a big consideration as far as what and how much I’m able to grow. I want to direct seed as much as I can, but it would be nice to have the certainty of seed-grown plants. If it could be a certainty—ha!

Very few of the plug trays are sold as a mix of colors or forms. For nearly all of them, it is an entire tray of that one exact type and color. In the small space that I have, I generally prefer to use the mixes. Unless it was something that was neutral, like Bells of Ireland that go with just about everything, I don’t feel like I can use the space on all of one thing. Also, I’ve got Bells coming up on their own accord and an abundance of seeds to direct sow as well.

So, essentially, I need to decide if it’s worth the extra expense to free up some time this spring. Last spring I found this flat of ‘Rocket’ snapdragons (pictured above) at the grocery store, of all places. Same variety I was attempting to grow from seed, myself, but these were already decent-sized plants. I bought the entire flat for $20 and got them in the ground. None of my own survived and I was so glad I had these to count on.

I am going to keep trying on the seed starting bit, despite my many MANY failures. However, my plan right now is to purchase some select flats of seedlings. I believe they do sell snapdragon trays with a mix of colors, so that may be my first investment in the world of plugs. I also would like to possibly purchase some lisianthus plugs—although those are going to be 1 whole tray of the same. The varieties I’m looking at, though, could be used with many different colors—white, navy, and a deep maroon.

I just saw someone in the UCFFA comment that they use soil-blocking to start all their seeds, and basically plan on it taking just 3-4 weeks from when they start them to planting in the ground. I think I need to call her and beg for more information, because there’s a crucial step I’ve been missing! Or perhaps she plants out her seedlings much smaller than I have been?

Anyway, along with determining my growing plan, my “recipes” and all the rest, I will be perusing the plug options in the next couple of weeks as well! Wish me luck!