My in-laws came to visit last week and we got some great projects done! The most visible is our newly spiffy front porch. It has definitely been a bit of a process, but after all the effort, it finally looks finished. I'm so happy with it.

Here's the progression, over several years: 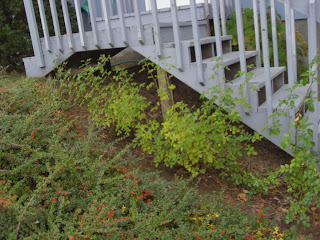 Kind of a slanted view, but pretty basic: wooden & blue, with space between steps and house.
Dirt underneath.

We kept that original porch for 5 1/2 years, but by then it was really in need of some help.
A couple of the railings were broken, the paint was peeling badly--it was time.

So, during last year's surprisingly mild January, we hired a builder to redo it.
We put the same decking for all the boards with foot traffic as we used on the back deck.
(It was either Trex or something like it--synthetic, very low maintenance, lasts forever.)
The rest was still wood.
We also gave up on any sort of landscaping choices in the dry strip between the porch and the house, and just filled it in with platforms for pots or planters. 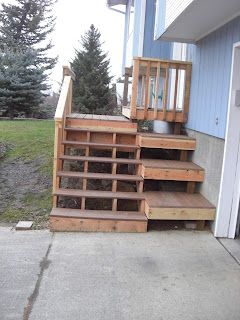 The flowerpot platforms worked beautifully!
(The white powder is ant poison--we had a real problem with carpenter ants this year.) 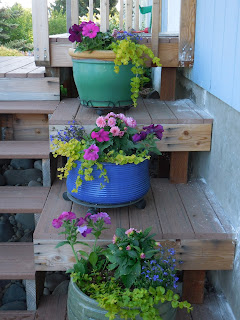 That was the status quo until we had the rest of the house painted.
As the railings and under part of the porch were all still raw wood, we knew something needed to be done with them before winter.
So we had the railings painted white to match the house trim. 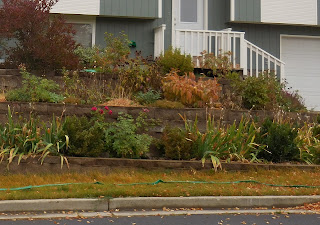 I was happy with this look, but my husband felt like it still need something a little bit more to finish it off. So last week, he and his dad stained all the support boards, and added one more layer to the railings. 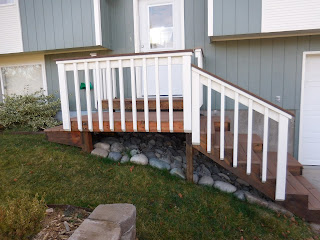 I really like the wood on top--I didn't even know what I was missing until they put it on there, but now I love it!
You can also see all the rocks we used to fill in underneath the porch--a spring project.
(We did a layer of weed cloth under them first.)
Especially since this side of the porch is so open, I think the rocks went a long way toward making it look finished, as well. 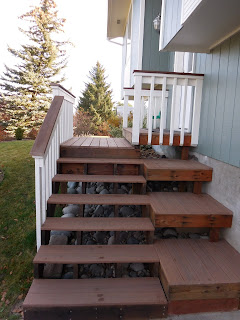 Staining the support boards really helped them blend in, which was the hope.
(It will help protect them from the weather, too.)

Now--on to the next project!
(There's always a project of some kind going on around here.)

Email ThisBlogThis!Share to TwitterShare to FacebookShare to Pinterest
Labels: projects