On the Goodness of Trees vs. The Haunted Wood

We just got back from a short trip to Olympic National Park and the Quinalt Rain Forest in Western Washington. We saw some incredible trees!

Check out this moss-covered behometh! 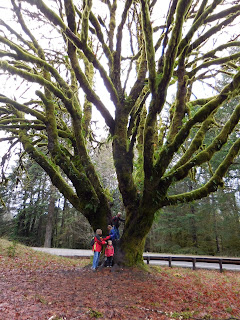 [They were almost all moss-covered over there.]

We also got to see the World's Largest Sitka Spruce tree, which they estimate to be around 1000 years old. That's hard for my finite brain to wrap itself around.
I touched a tree that has been alive for 10 centuries. Wow.

We hiked in to see the World's Largest Western RedCedar, only to discover that it had fallen down.
(The trail had not been maintained, with 2 other substantial trees fallen across it in places.
Guess that could have been a clue!)
Another hiker told us that half of it split off 2 years ago, then the rest went last year.
Even in pieces, it was magnificent. 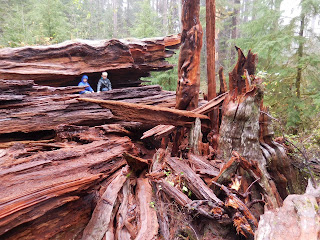 That's my two oldest up there--they somehow picked their way through the wreckage to take a seat in the crevice.

I love trees.
It all goes back to my childhood.... (HA!) Well, actually, I think it does.
I lived in Barrow, Alaska for about 7 years, from age 10 until I graduated from High School.
Barrow is the northernmost town in North America. It is far, far above the treeline.
In other words, it is too darn cold for trees to grow up there!
(Okay, for you scientific sticklers, there is a species of dwarf Arctic willow that grows on the tundra--flat against the ground, and only about 2 feet long. Doesn't count!!)
Barrow is surrounded by miles of tundra on one side and the Arctic Ocean on the other.
Some jokester had nailed a sign to an old telephone pole that read "Barrow National Forest."
Yep, that was about right.

Anyway. No trees in my daily life for quite a long stretch.
I remember when we would fly down to Fairbanks, which is blanketed in trees, and it was such a feast for our sore eyes! I may or may not have hugged a tree outside the airport at one point.
This deprivation may have contributed to my current love of trees (and gardening, come to think of it--there wasn't much of that to be had either.) 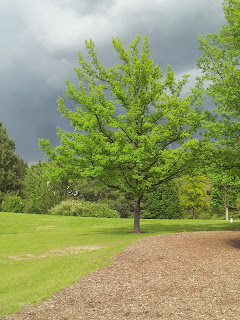 We all learned in Biology class at some point all the goodness that comes from trees.
I'm sure you know all the things.
So, all this to say that I find it fascinating when trees are portrayed as evil.
Many, many books take this approach, including The Night Gardener (review coming tomorrow!) 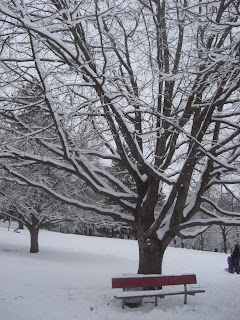 Think of the Whomping Willow in Harry Potter, the terrifying corrupted Wood in Uprooted, and all of the thousands of books about the dark, haunted, or scary woods.
So, what's up with that?
Is it just the "otherness" of forest life, with its nocturnal creatures and toothy predators?
The deep, dark shadows under those branches?
Why is this such a theme in literature?
I will admit, at one point last weekend, we were driving past some pine woods, where the trees were all quite close together. It was pitch black under there! You couldn't see in more than about 5 feet.
I certainly did not want to get out and explore it.
So...maybe just the physical darkness leads to a perception of otherworldly darkness, as well?

In The Night Gardener, part of what made the tree so sinister was that it was very, very old--there were hints that perhaps it was the original Tree of Life from the Garden of Eden, after the Fall.
There were also indications that many people had tried to cut down the tree and failed.
Again, in books it's usually the older part of the woods that is deemed unsafe. 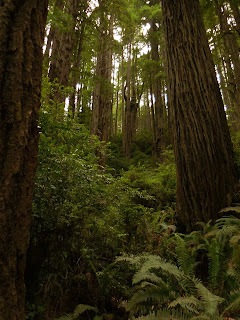 
Again, completely opposite of my experiences.
As I mentioned in the beginning, old trees are particularly awe-inspiring to me.
Have you ever been to the Redwoods?
We went last year, to the Redwoods National Park in Northern California.
Amongst those giant trees, some of them hundreds of years old, there was a special--even sacred--feeling; even with all the manmade trails and such.
I found myself getting emotional at times.
It was just amazing. I would go back in a heartbeat.


A tree planted in the wrong place might be annoying or even destructive, but that's not the tree's fault.
Wild trees....I just don't think they're scary.
I think they're awesome and interesting.
What is your take on all of this?
Posted by Linnae at 8:00 AM

Email ThisBlogThis!Share to TwitterShare to FacebookShare to Pinterest
Labels: trees