If you like steampunk at all, give this series a try! Gail Carriger has a created a world of unlikely companions: for example, proper young ladies training to be spies and assassins. She has mixed in a few supernatural elements--vampires and werewolves--and added a school that's a floating dirigible, mechanical gadgets and gizmos, clever dialogue, and all the social conundrums and intrigues of boarding school.

The whole series was fun and entertaining. It never takes itself too seriously. If you need a break from more weighty fare, you could do a lot worse than these books! 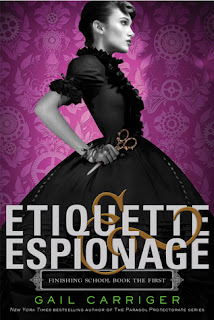 Sophronia is so busy riding dumbwaiters and climbing trees that there's absolutely no time leftover for being a lady, much to her mother's dismay. So her mother sends her off to Finishing School. As Sophronia soon finds out, it is a very unusual sort of school, with as much emphasis on information gathering and deceptive messages as eyelash fluttering or curtseys. Much to her surprise, Sophronia feels right at home.

But there's a puzzle to be solved: one of the older girls, Monique, has hidden a mysterious communication device that is highly sought after on all sides. In fact the school (3 floating dirigibles smashed together) has already been at battle with flywaymen because of it. Sophronia is determined to find it, no matter what!

The steampunk world already intrigues me, and this deliciously frothy plot topped it off to perfection. 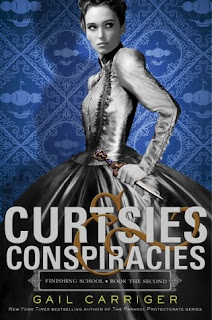 3 stars: If you liked the first, you will like this one!

Sophronia is back at school in the dirigible, and back to her old tricks--she certainly climbs down to the boiler room often enough to chat with her boy-pal Soap. Everyone on board is all atwitter, because the school is actually going to London. For a ball, no less!

However, not everything is as it seems (is it ever?) Sophronia is convinced there is something more to the trip than simply allowing the young ladies a chance to use their best ball gowns--and their espionage training. There are political rumblings amongst the supernaturals (vampires and werewolves) and London is the heart of all things political for the kingdom.

Sophronia is not about to let the wool get pulled over her eyes. In the meantime, there are lessons to learn (hive dynamics of vampires, the use of accessories as weapons), boys to practice flirting with, and best friends to defend. It's going to be a busy semester!

* * * * *
Much like the first, this was a fun ride and a quick read. Sophronia faces new obstacles with aplomb, both socially and in her clandestine activities.

It's all a bit over the top, but it's meant to be! Don't look for deep thoughts or subtle messages here. This is nothing but delicious book candy. Enjoy it while it lasts! 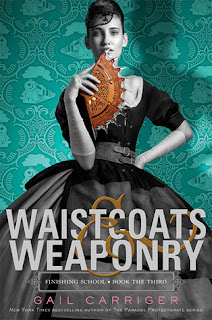 3 stars: A stepping-stone on toward the conclusion.

Welcome back to steampunk England, where certain proper young ladies have to know not only etiquette and deportment, but also the inner workings of a werewolf pack. It would also help to know who they can trust, if anyone.

So what are Sophronia and friends to do when one of their own has an urgent need to return to Scotland? Well, they sneak out of school and find a way to get her home, of course. They hitch a ride on a train that is strangely empty. Well, almost empty.

The politics that Sophronia just brushed up against in book 2 are back in full force, and as usual, she finds herself in the thick of things. Saving London as everyone knows it may be up to her. Fortunately, if there's anything Sophronia's good at, it's coming up with a plan.

* * * * *
I liked this one for all the same reasons I liked the first two: the steampunk setting juxtaposed with proper English society, and an intrepid maiden deftly finding her place in both worlds. Witty writing and enough action and romance to keep things moving.

This one didn't stand out in particular from its fellows, but by this point, reading it was a foregone conclusion. 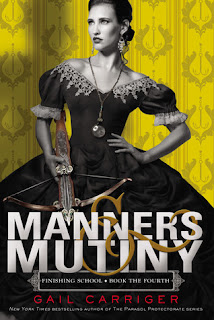 4 stars: Everything comes to a head.

Sophronia is back at school just in time. This time the danger is going to hit close to home. While most of the young ladies are safely and properly not on board when the takeover happens, Sophronia is there--along with some of the less helpful staff members. Once again, though, people have secrets that Sophronia knows nothing about. It's time to put all her skills to the utmost test and bring this thing around--for the good of all England. It's unfortunate that the school itself may become a casualty in the fray.

* * * * *
This was a strong ending to the series. Loose ends were tied up. Like the others, there was plenty of sneaking around, plotting, and covert action. Meanwhile, there were a few secrets revealed that had been hinted at all along.

Sophronia had to make some decisions about what her future was going to look like and who would be included in that. I was satisfied on all accounts.

A note on content: These are geared for teens and are clean, for the most part. These are proper young ladies, after all. When the werewolves transform into people, they are naked. Generally it just gets a mention, at times it is commented on a bit more. A brief discussion amongst the girls about the mysteries of male anatomy in one of the books.

FYI: This series is a prequel for Carriger's Parasol Protectorate series, which are written for adults, and include some sex scenes (according to reviews I have read.)