To Be A Queen

Quite without meaning to, I've managed to read 2 different books about queens this month. One was historical fiction, based on extensive research, about Queen Katherine of Aragon--King Henry VIII's first wife--and the other was a memoir by Queen Noor, wife of King Hussein of Jordan. 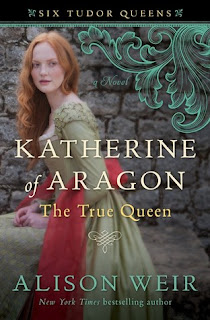 Katherine of Aragon, The True Queen, by Alison Weir

3 stars: I learned a lot from this.

Catalina was only 16 when she left her home and family in Spain and travelled to England to marry the Arthur, the Prince of Wales, King Henry VII's oldest son. She was warmly received and the marriage itself was very grand. Her husband was quite sickly, however, and in fact died within the year of tuberculosis.

Fairly soon afterward, she was then betrothed to the next son, the future King Henry VIII. However, at 5 years younger than her, their marriage had to wait until he turned 18. During this waiting period, she was pretty much stuck in England. Her future father-in-law refused to finance her living expenses, due to a dowry payment that had never been paid, and she was as much in poverty as a future queen living in a palace could be.

Finally, the long-awaited time arrived and she and Henry were wed. Providing an heir and successor to the throne became Katherine's new role. Unfortunately, pregnancy after pregnancy ended in miscarriage, stillbirth, or babies that died several hours after birth. One little boy lived 52 days before dying, to the devastation of all. Princess Mary was the only child to live to adulthood out of all the pregnancies.

King Henry VIII's determination to have a male heir seems to have greatly contributed to all that went on later in their marriage. His pursuit of a divorce from Katherine, which eventually led to England's break with Rome and Catholicism entirely, his affairs and later marriage to Anne Boleyn, and so on.

The book stayed true to Katherine's perspective throughout, following her into exile over her refusal to yield her position or title, and the indignities and privations at the end of her life.

* * * * *
If you are a student of English history, none of this will be new to you. I have learned some here and there, so the historical characters were passingly familiar to me, but this brought them to life in a whole new way. I didn't know much at all about Queen Katherine going in. As she was portrayed here, I couldn't help but admire her for sticking to her principles, and sympathize with her tragic losses. I'm interested now to learn about this time period from other perspectives.

Though it is historical fiction, the writing style made it feel more like a historical biography with conversations and personal speculations added in here and there. Not that I was bored, but I wasn't swept away either. At just over 600 pages, it was a bit of a time commitment. I read it concurrently with some fiction, which helped break it up a bit. 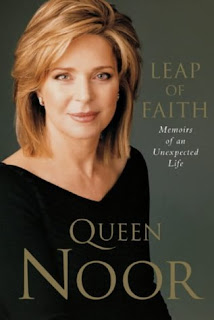 Leap of Faith: Memoirs of an Unexpected Life, by Queen Noor

4 stars: Eye-opening account of Middle Eastern politics from the perspective of one who was in the thick of it.


Lisa Halaby was born and raised in the United States, in an Arab-American family. She grew up and graduated from Princeton. She first met King Hussein of Jordan as a young professional, working at an international job. Later on, after the death of Hussein's third wife, they met again. This time, a friendship became courtship and later marriage.

Upon marriage, Lisa renounced her American citizenship, as well as the Christian Science faith that she was raised with. She simultaneously took on a new name (Noor), a new religion, and a new country. She also became stepmother to King Hussein's already large family of 8 children, including 3 little ones still very much in need of a mother. Together she and the King had 4 more children.

In addition to her personal life, this was the story of her husband's reign over the 20 years they were married, until his death from cancer. Queen Noor described the constant conflict and international tensions in the Middle East, including countless frustrating setbacks in the pursuit of peace.

* * * * *
First, just let me say--this one has been on my "to-read" list for ever! I remember checking it out from the library way back when I worked there, but returning it unread. So that would have been in 2005, or thereabouts. I found a copy at the thrift store about a year ago; same story. I finally tackled it and I'm glad I did! (Plus, check off one more book that I've read from my own bookshelf. Woohoo for working on New Year's Rezzies!)

It was fascinating to get a different perspective on all the happenings in the Middle East over the time period of the book. It helped me understand where the Palestinians have been coming from all this time. As the book points out time and again, the U.S. is very pro-Israel, including in our journalism and reporting of events, so I appreciated seeing the other side of things from an insider's point of view.

Queen Noor talked some about family life, though not as much as I would have liked. I can understand, though, how her position in the family and in the country would not tend to a share-all attitude. She mentioned some hard times, but didn't dwell on them.

* * * * *
Reading about these women in positions of power and influence was so interesting. They both made many sacrifices for their kingdom and their husbands, particularly in their private lives. I couldn't help but compare their situations. Let's talk about it!


First wife vs. 4th wife
Both monarchs had other women in their lives. Queen Katherine's entire later life was consumed by her husband's pursuit of Anne Boleyn. In fact, this affair turned questionable marriage dragged all of England into its chaotic wake.

According to this account, Katherine and Henry's best years of marriage were at the beginning. They enjoyed spending time together, he was respectful of her, they mourned the loss of their babies together. However, as time went on, he became more and more estranged, began having affairs, and eventually became very embittered toward her.

On the other hand, Queen Noor was Hussein's 4th wife. She was much younger than he when married, and immediately took on the responsibilities of motherhood, as she raised his children by previous wives. Though their marriage went through some rough patches, they stayed faithful to each other and truly loved each other to the end. Noor stayed by her husband's side at the Mayo clinic all during his chemotherapy treatments the last 2 years of his life, and after 20 years of marriage, they were still deeply in love.

Queen Noor does describe some challenges--not so much with the earlier wives (2 of the 3 were still alive), but with raising her stepchildren. She said there was a period of a couple of years, with several teenagers in the home, that she didn't think she could make it one more day. However, over time, it gradually got better. Older children moved out and started families of their own and tensions eased.


Babies, or Providing an Heir
This was a Big Deal back in Queen Katherine's time. In fact, her entire focus for many years was having a baby boy to be the heir. Pregnancy after pregnancy. She was not successful in that, so on top of dealing with the grief of losing so many babies, she also had enormous guilt that she had failed her husband and her country. (She took all the blame upon herself, according to this book, which was probably accurate for the time.)

In contrast, King Hussein had already named his brother Crown Prince many years before Queen Noor even came on the scene. Just before his death, the King changed it up and gave the title to one of his older sons instead. So that part of it didn't really have anything to do with Queen Noor.

As for babies, she and King Hussein had 4 children together (plus one miscarriage.) Every child was welcomed. She mentioned, though, that they had an initiative going in Jordan to lower the high birth rate, so she felt a bit guilty or wondered what the people would think when she got pregnant with their 4th. Wow, what a difference between those ideas!

The Role of the Queen
Queen Katherine's main role was to provide an heir to the throne. She did dabble in politics for awhile, while her husband was away at war and England was invaded. For awhile, she was appointed Ambassador for Spain and enjoyed the added respect and power that title afforded. However, it didn't last, and she was back to primarily being arm candy for the King, while pregnant. The book indicates that early in their marriage, he discussed everything with her and she felt like she had quite a bit of influence with the King's decisions. Later on, of course, that all changed.

Queen Noor was and is very active politically. Outspoken and intelligent, she travelled all over the world, making speeches and doing everything she could to further Jordan's (and her husband's) causes. Back at home, she started a Foundation to oversee all of her pet projects, including help for refugees, women's rights, and an annual cultural arts festival. She and the King weathered every setback side by side.

So tell me--would you want to be a real-live Queen? I'm thinking it's not all those princess movies make it out to be!