I just so happened to read 3 mysteries in a row in August. Funny how that goes sometimes. They were all very different in tone. First up was Agatha Christie's cozy mystery, mostly based around characterization, with quite witty dialogue and observations. Next was Mills' book, which was a historical thriller--lots of chasing, bloody confrontations, near misses, twisty plot. Finally was Stone's Fall, much more a literary work, with a mystery at the heart of it, but all sorts of side plots going on at the same time.

So depending on what you like best, maybe you can find something here to read. 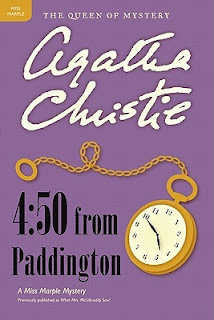 3 stars: A great read for a long afternoon.

Mrs. McGillicuddy, a solid matronly woman, is on the train for home just watching the countryside go by. Then a train passes going the other direction. She is quite startled to see a man strangle a woman to death in one of the compartments as it goes by. She is deeply disturbed by what she saw and immediately reports it, but no-one really believes her.

She watches the news but the murder never makes a headline. No-one is reported missing; no body is reported as having been found. She knows what she saw. She is not one given to hysterics or flights of fancy--morbid or otherwise. She also knows who can get to the bottom of it: her friend Miss Marple.

Miss Marple is indeed fascinated when she hears her friend's story and comes up with a plan. There's a certain estate, owned by a reclusive and grouchy old man, that borders much of the track right about where Mrs. McGillicuddy saw the murder occur. All that remains is to get someone onto that estate, and Miss Marple, in turn, knows just the perfect person: Lucy Eyelesbarrow.

Ms. Eyelesbarrow is a very intelligent woman who long ago decided to put her prodigious talents to use as an interim housekeeper. Seems a bit far-fetched at first glance, but really it makes a sort of sense. She doesn't mind hard work, and often manages the affairs of her temporary employers much better than they can do it themselves. She is booked solid and can pretty much name her price.

Miss Marple manages to convince the much in-demand Ms. Eyelesbarrow to take on this unusual job. She will do all the poking around on the estate and report her findings back to Miss Marple, who is masquerading as an elderly relation that must be visited regularly.

Well, a body is found. All that remains is to figure out who she is, how she got there, and of course, who put her there in the first place.

* * * * *
Miss Marple is such an interesting character. The idea that her knowledge of human behavior allows her to make connections that the police miss--do all people run so true to type? I guess in her world they do, because she is almost immediately able to figure out hidden motives based on her observations of a few minutes here and there.

Realistic or not, it makes for an entertaining read. Ms. Lucy Eyelesbarrow was a great character. So efficient! She can get the meals made, the dishes washed up, cleaning and errands taken care of, and be off poking around in other people's business in no time at all.

I was surprised by the ending, which is always a plus with a mystery novel.

Content: The murder is briefly described, as seen by Mrs. McGillicuddy. 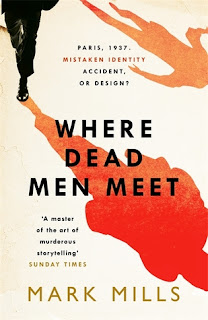 "Yet meet we shall, and part, and meet again
Where dead men meet, on lips of living men."
--Samuel Butler

Luke Hamilton grew up as an orphan, and now works as a junior air intelligence officer in the British Embassy. It's 1937, and tensions are heating up in Europe. One night the nun who raised him is brutally murdered. Luke is on the way to her funeral when someone tries to kill him. It must be a mistake--of course that's what he thinks at first. He's never been involved in anything that would cause a hit to go out on him.

He's about to go back to business as usual, but Borodin, the would-be hit man, sets him straight. Borodin tells him he had better run--NOW and fast. He gives him money and a destination to meet up at in a few weeks' time. Although Luke doesn't know why he should trust Borodin, further circumstances make it clear that the men who want him dead are not going to go away. So he does what Borodin suggests.

Never completely sure who to trust, Luke has to come up with his own plan of survival. It all seems to have something to do with his parentage, which is crazy, because even the nun who first took him in knew nothing about it. Meanwhile, there are wheels set in motion in various underworld circles that put Luke right in the center. Unfortunately, it seems to be the center of a target.

* * * * *
This book covered a lot of ground, from gang wars, to spies and hit men for hire, to Jewish refugees fleeing pre-Nazi Germany. Luke is chased all around Europe, covering ground physically as well, finally ending up in Venice. The motivations of various characters were complex as were their decisions in light of those motivations. Borodin was probably the most fascinating character. It was worth it reading this for his story arc. Strong ending.

I liked it--I wasn't on the edge of my seat to find out what was going to happen, but it kept my interest. The very fact that it was completely plausible was a bit depressing--so much evil goes on in the world. 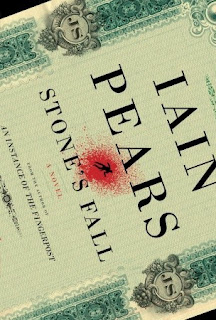 2 stars: Tedious towards the end, and the big reveal wasn't worth it.

John Stone is supremely wealthy and powerful in the business world of England and Europe. One night he falls out his window, dying on impact with the road below. His grieving widow hires a young, brash journalist--not to find out the circumstances of her husband's death, though there are several suspicious factors--but to discover a child mentioned in his will that she never knew about. You see, 250,000 pounds have been allocated to this child, so it's pretty important to find out who he or she is.

It immediately becomes clear that the journalist is in way over his head. Who are these people, anyway? Well stick around, because sections 2 and 3 answer that question in plenty of detail.

* * * * *
Written in 3 sections, each preceeding the last in time and from a different character's point of view. In many ways it was like peeling an onion: each successive layer brought added insights into what you already knew from before. After the first 3rd was over, I was quite pleased with the book. I would have given it at least 3 stars--maybe four. Sure, there were some loose ends, but I was satisfied.

Then we started the story again, only earlier on and from the POV of a character closer to Stone and his wife. More things were revealed. More connection between the characters made. Still not very much closer to finding out what really happened that night at the window. Starting to drag a bit, but I kept at it.

Finally, the third time around, we got the story from Stone himself. His disastrous love affair in Venice and all that ensued. Unfortunately, by the time I got around to that point, I was losing interest in the whole thing. I was close to putting it down, but by that point I was already several hundred pages in. There were more connections and revelations, but half the time I couldn't remember who they referred back to and I had no desire to page back through and find them.

All three of the main characters' voices sounded remarkably the same to me, which added to the monotony. Then we FINALLY got to the big ending moment where all was revealed, and my main thoughts were: 1) disbelief--I mean, there are coincidences, but this was a bit too much of a coincidence to be believed, and 2) Ick.

So there you have it. Glad that one's behind me. Moving on...

Do you enjoy mysteries? Have a favorite author I should try out?