This one was a bit heavy, but there were some good reads in there nonetheless. So many children are exploited and made to do terrible things for adult captors. This is the stuff of nightmares for a parent. That's why I put Protecting the Gift first on the list. If you don't read any of the others, read that. Learn how to arm yourself and your kids with knowledge and skills. Then go on and read the others if you wish. 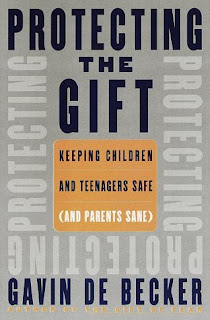 5 stars: Every parent should read this.


This book goes through many different scenarios, and talks through how to spot a predator or violent criminal, and what to do about it if you think there is one. He talks extensively about our inner response to people we are around. Bottom line: if someone makes you feel uncomfortable, don't brush it off--pay attention to that feeling! Take notice of what's going on and determine if you need to take further steps or not (leave, gather children closer to you, get a ride home rather than walking, etc.) If you are around someone that makes you feel fear, trust your instinct. You don't have to be polite, you don't have to have a specific reason. Get yourself and your kids out of there!

He is very blunt and straightforward. Another point: we need to stop telling our kids not to talk to strangers. Just stop it! It's not helpful. A very high percentage of the time, sexual predators (for example) will be someone they know. In contrast, the chances of them being abducted by a stranger are very, very low.

Instead teach them how to pay attention to their own feelings, how to find a helpful stranger if they get lost or separated from you (it is far better for them to choose someone than for someone to choose them) and what to say and do if someone is trying to touch them inappropriately. He goes through vetting babysitters, preparing kids to walk to school alone, and other specific topics of concern.

There are many examples of real scenarios that people have shared with him over the years to illustrate his points. He gives specific traits that predators exhibit when sizing up a victim. One of the examples I'm still thinking about was one where he was able to prevent a tragedy from happening. He was on an airplane, sitting behind a teenage girl flying alone, when the middle-aged man across the aisle started up a conversation with the girl. De Becker knew just from the way the conversation went that this man was a predator. (In the book he goes through each point that gave it away.)

When the man got up to use the restroom, De Becker leaned forward and asked if he could talk to the girl. He told her, "This man you've been talking to is going to offer you a ride from the airport. Don't take the ride. He is not a good man!" That's about all he had time to say. Sure enough, he saw the man come up to her at the luggage claim. Though he couldn't hear the conversation, it was clear the she was saying no. The man stomped off.

* * * *
I should not have read this one just before bed. It took a long time for me to fall asleep, thinking about what I had read. My husband actually read it first and told me I needed to read it. It's not an easy read. It required facing up to some of my deepest fears as a parent, but offered concrete, practical advice on what to do about these problems.

Our world is not the same as what our parents grew up in. We need to be prepared and smart, and teach our kids how to be safe.

In fact, this has already changed the way I talk about these things with my kids. We need to do more direct teaching, but things have come up in conversations here and there that I have drawn upon what I learned in this book to frame my answers. 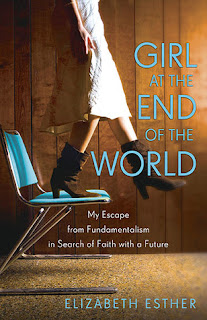 Girl at the End of the World: My Escape from Fundamentalism in Search of Faith with a Future, by Elizabeth Esther

3 stars: A true story of courage and change.

Elizabeth grew up in a family of Christian fundamentalists, a group founded by her grandfather called The Assembly. While in many ways, her family probably seemed normal to the outside world--they didn't go off and live in a compound, for instance--her life completely revolved around the strict rules and punishments of their church. Her parents gave her spankings that bruised, with a paddle, well into her teens as punishment for her sins. One of her biggest fears as a little girl was that the Rapture was going to happen and she would be left behind.

However, as she grew up, Elizabeth began to feel suffocated by the religion. She and her husband Matt also became increasingly concerned by reports of abuses happening and then covered up by her father and grandfather. Together, they finally confronted her grandfather, and together left The Assembly, along with their children.

* * * * *
This was such an interesting story. Elizabeth brought it all to life; the desire to please her parents (that would include preaching on street corners at age 9), the way her desires and talents were constantly squashed to keep her in line, as well as the ritual abuse that occurred, under the guise of helping her repent. She didn't gloss over any of the difficult parts of the story, nor did she spare herself when she was a part of what was happening. She does have a sense of humor that comes through as well.

I found her descriptions of her life after leaving The Assembly to be especially telling. It wasn't just all fine once they had left. They still had to battle the effects of their upbringing (her husband was also raised in The Assembly,) and Elizabeth had long-lasting anxiety, panic attacks, and depression to work through. I also enjoyed learning about her experiences searching for another faith.

Despite my interest in the story, however, I found the writing style to be quite jarring. Most of the story was in past tense. Then, every time she would tell a flashback, she would switch to present tense. I think it was probably to give those episodes more immediacy, but it was confusing and jerked me out of the narrative every time. Not my favorite stylistic choice. 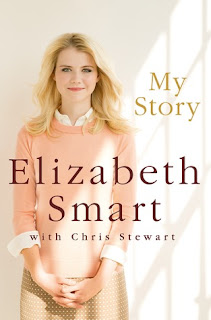 My Story, by Elizabeth Smart with Chris Stewart

Elizabeth, arguably the most famous kidnapping victim in recent history, recounts the story of her abduction, and the 9 long months she spent under the control of her captors.

* * * * *
Like many people, I had heard or read news accounts of Elizabeth Smart's kidnapping and subsequent recovery, but hadn't ever delved deeper than that. I found this book on the shelf of the house where we're staying and read it in one sitting.

It was well done. While she didn't shy away from talking about what happened to her, including rape and other terrible things, she never delved into crass details. I appreciated her restraint in that regard. I also admired the way she defended all the people who might have saved her or rescued her earlier, but did not for various reasons; starting with her little sister.

Her strength and positive outlook were inspiring.

Content: For older teens on up. I think it was as clean as it could be, considering the subject matter. Be aware that it contains mentions of rape, kidnapping, attempted kidnapping, alcohol use, theft, starving, and other potentially sensitive topics.


Now for a fictional one: 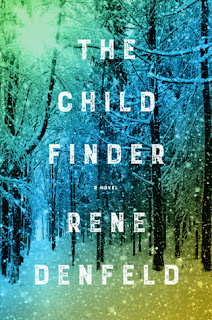 The Child Finder, by Rene Denfeld

4 stars: This is one of those stories that has stayed with me since I read it.

Madison Culver disappeared while searching for the perfect Christmas tree with her family, in Oregon's Skookum National Forest. It was snowy that year, and she was just a small girl. Though her body was never found, the chance that she survived is right around zero; a fact that Naomi, the "child finder," does not shy away from when she is hired by Maddy's desperate parents to take the case. It has been a couple of years now since she got lost and the trail--if there ever was one--has long since gone cold.

That doesn't stop Naomi, however. She has a sixth sense for these cases, it seems. She is in such demand that she has to pick and choose very carefully which cases to take. Every one is heartbreaking in its own way, but some of them, every so often, have a ray of hope at the end. She does find some of the children.

However, something about this particular case is making the nightmares of her past come back more vividly than ever. She was once a lost child, too. Until the day she escaped across the strawberry fields. She remembers that wild run in detail, but she can't seem to remember what came before it. The deeper she follows this trail, though, the more it brings back snatches and glimpses of her own childhood. The child she finds at the end of this case may just be herself. She's not sure she's ready to face that yet.

Meanwhile, Maddy Culver doesn't exist anymore. In her place, in the underground root cellar of a cabin where she is kept, lives The Snow Girl, instead. The Snow Girl is made of snow and can't be hurt like Maddy. The Snow Girl can do a lot of things that Maddy couldn't; including survive with the strange silent man who sometimes is kind and sometimes terrifying. The girl Maddy is tucked safely away, deep inside the Snow Girl. Maddy still hopes to be rescued, sometimes. Snow Girl is not sure what that even means anymore.


* * * * *
In this book, the dual themes of missing children and rescued children interweave throughout the narrative. Sometimes the missing became the rescued, and sometimes those who were rescued were still missing in vital ways. It was hard to read, in many ways. It made me want to become a foster parent sooner rather than later.

For all of the difficult subject matter, there was hope and resilience woven into the mix as well. Naomi herself was a bringer of hope and perspective to all whom she encountered. Her foster mother was all that was wise and understanding toward the broken children in her care. Naomi's firm belief was that someday, all of her rescued children were going to rise up and save the world.

Content: Descriptions of child abuse--sexual and physical, as well as child captivity. Two murders, some intense scenes. I don't remember on the language. For adults.