Why I Won't Put in a Water Feature

There's a big trend in gardening right now to put in a pond, or stream, or water feature of some sort.
The main idea is that it will attract wildlife, but the sound of running water is also supposed to be very soothing and give the feeling of being in an oasis. I think.

I have yet to put one in.
At least, not a permanent installment of the kind I see all over the internet.
I had a birdbath in Washington, that I was happy to keep filled in the summer.
Robins often took a bath in it and mourning doves got a daily drink.
It was enjoyable and made me feel good.
I felt like I was doing my bit to keep suburban bird populations thriving.
I didn't have room for a pond, which was okay by me.
I had little ones and a pond was a safety hazard I wasn't ready to navigate.

So now here we are in a more rural community in Utah.
I have even less desire to make a fake pond in my backyard.
I do actually have room here, but it's not going to happen.
You see, there's water all over the place around here!

We have a river across the street, running through our neighbor's back yards.
Most of the fields and several of the lawns around here are still flood irrigated.
This means there are canals full of water very close by.
[Not ours, mind you. The canal along the far edge of our property had only about 2 inches in it on one day last summer; the rest of the time it was bone dry.]
The one right across the road in the horse pen, though, had 3-4 feet of water all summer long.
There are more canals all along the east side of the field behind our property, again running 4-6 feet deep, all summer long. 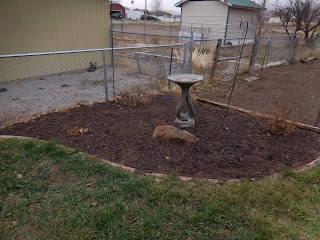 I brought along our birdbath, and had it set up out front last summer, but even when I remembered to fill it, I never once saw a bird using it. Why should they? There's water all over the place!
Water that stays cool and even has a slight current.

That's the main reason.
There are others.
One of the bigger ones is that I'm just too lazy to do it.
Putting in a fake pond or stream is quite an investment of time and money and sweat.
Then you have to maintain the blasted thing. Regularly.
Otherwise it becomes more of a swamp, complete with funky smell and mosquitos.

Another one new to me: Utah is a desert.
Water is a Big Deal here, as I have been learning since we moved.
(I know, it seems to contradict what I just said about water being everywhere, but even with the water resources we have in our little valley, drought and water usage always loom large in the public consciousness here. The condition of the snowpack in the mountains--or lack thereof--is reported on daily in the weather news.)
It seems rather extravagant to use precious water just to make a pretty noise in your backyard.
I realize that most of these systems have pumps that recycle the water, but the air is so dry here I'm sure you would lose a significant amount to evaporation.
Even if I had one, I would probably feel too guilty to run it.

And...I still have the safety concern.
Before my baby was born, this one wouldn't have been as big an issue, since the next youngest is 5, but even so--water draws kids like a magnet.
Not only would I not want the older kids playing in it, but in the case of a pond or stream, I would worry about my baby girl ever being out in the back yard without direct supervision.

The one water feature I still consider from time to time is a bubbler-type fountain, the kind you can make in a large pot. Lately, though, I've considered it less and less. I just don't see the point.
I KNOW the kids would constantly be playing in it.
Probably neighbor kids too.
It's not a relaxing garden element if you're constantly battling your children over staying out of it.
Put on the sprinklers and let them have some good old-fashioned fun that way.
At least the grass would get watered.

Do you have a water feature in your garden?
Go ahead; give me all the reasons why I need to add one in mine!
(Or tell me all your horror stories. Ha!)
Posted by Linnae at 7:00 AM