The Indifferent Stars Above, by Daniel James Brown

This was a good one to read in the middle of winter. My sympathy for these poor people became even more acute with the wind and snow howling around my door. Not an easy read, by any means, but one that I learned a great deal from. 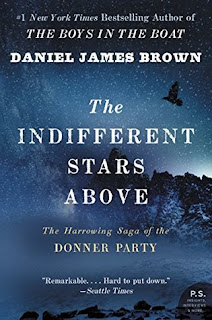 The Indifferent Stars Above: The Harrowing Saga of the Donner Party, by Daniel James Brown

4 stars: The depths of human suffering, vividly and compassionately told.

I loved The Boys in the Boat when I read it, and I was highly interested in reading this one. He did not disappoint. Due to the nature of the story, this one was a much harder read than his first, but just as well written.

Brown follows the story of Sarah Graves Fosdick, a young newly-married woman going west with her husband and her family. She was the oldest of 8, and when the rest of them decided to leave malaria-ridden Missouri for the wonders of California, it was breaking Sarah's heart. She had just become engaged, and it looked like she was going to have choose between her marriage and seeing her family ever again. Then fortune smiled upon her--it seemed--and she and her sweetheart Jay were married prior to the trip. They determined to go along and drove their own wagon.

The first big problem they encountered was bad information. An author and scoundrel named Lansing Hastings wrote a travel guide for emigrants heading out west to Oregon and California. Some of the information in the book was okay, but one key piece was not: Hastings claimed there was a shortcut through the Sierra Nevada mountains, fully passable by wagons, that would shave several hundred miles off the journey to California.

He had never himself taken the supposed shortcut until after the publication of his book. When he did take it, even though it became obvious that it was highly unsuitable and downright dangerous, he continued to promote it to the oncoming wagon trains. The Graves and Fosdick families, along with the Donner/Reed party they had joined, determined to take Hastings at his word, rather than take the established trail. Everything that came after stemmed from this one decision.

* * * * *
I learned much I didn't know about the ill-fated Donner Expedition through this book. For instance, I didn't realize that there were so many children along, including 3 infants. Other than the fact that cannibalism was a part of it, I didn't know any of the particulars. It was heart-wrenching to read of the mothers, trapped by snow in the High Sierras for months, in makeshift cabins trying to keep their kids alive, and the brave fathers, brothers, and sisters, determined to forge a way out and get help.

They were just 100 miles or so from their final destination at that point, but the snow was 20-30 feet high in places. They made some snowshoes, which helped, but they were already run down, exhausted, and in the early stages of starvation from their long journey. The crew that went for help took a wrong turn at a critical point that added several days on to the journey. Time that they didn't have to spend. Things just spiraled down and down for them and for those they left back in the mountains.

Interestingly enough, the women out-survived the men by 2x as much. The first 14 members of the Expedition to die were all men. Of the 87 members of the party, only 40 survived the ordeal, a relatively high percentage of them children. Single unattached men had the worst survival rates; of the 15 in the group, only 3 survived.

The descriptions of cannibalism were not glossed over. If you have a weak stomach, do not read this book. Awfulness. Also, the way the decision to eat the dead affected the minds of those who did it was fascinating and disturbing. More than one went crazy and still others began contemplating murdering their companions for the meat. It seemed that once that line was crossed, other moral taboos shattered as well. All of them experienced PTSD in years to come, though of course it wasn't known as such back then.

Sarah was one of those that survived, but like all the survivors of the ordeal, at great personal cost.

The other part that I found fascinating was the description of getting their wagons through the Wasatch mountains. Weber Canyon, to be precise, which hey--what do you know?--is right in my neck of the woods these days. I've gone hiking pretty close to where they were trying to come through, I think. I could vividly picture those passages and how excruciatingly hard it must have been to get through. Meanwhile, I was feeling grateful for the freeway that runs through here now. We get through the canyon in 45 minutes and hardly think about it. Unfortunately for the Donner party, Weber Canyon was just the beginning of their troubles.

Content: Murder; starving and cannibalism described in detail. For adults.

p.s. Due to the content, this is one I haven't even mentioned to my kids. I generally like to share what I learn from the nonfiction books I've read. Not this time. Too grisly.