Valentine’s week was amazing and busy! I ended up making 45 arrangements!! It was such a great learning experience for me, particularly in regards to systems and the business end of things. 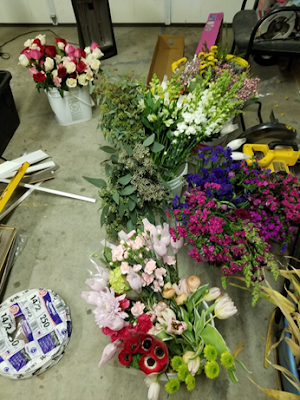 Yes, you get to see my messy garage right here too. #keepingitreal or #toolazytocleanforapicture

The week before Valentine’s I counted vases (and bought some more), and made sure I had the hard goods that I would need.

I also put in my biggest ever flower order that week, by phone. That was a mental math problem that I grappled with for a couple of days, actually! There were so many variables to add in, namely: total number of arrangements ordered, size of arrangements ordered, types of flowers needed, numbers of stems of each flower type to put into each arrangement, number of stems per bunch from the wholesaler, and of course, cost per bunch. Then after all that, I got to move on to total cost vs. total budget and make them align. Fun times!

Added on to that was the fact that I am a very visual person, particularly when it comes to putting flowers together. I really prefer to go in person and wander the cooler, choosing what looks freshest and what colors will complement each other well. It was hard for me to get on the phone and work from a list. It was a long phone call, even with all my number crunching beforehand, as I tried mightily to picture colors and textures, and how they would work together. For this order, though, that was not an option. I needed to reserve the flowers in advance or I ran the very real risk of what I wanted selling out.

So after I got the flowers ordered, I went and picked them up the following Tuesday. Tuesday afternoon my oldest son helped me prep flowers for a couple solid hours in the afternoon. This entailed removing the plastic sleeves and rubber bands, stripping any lower foliage, re-cutting stems, and organizing them into buckets by color. In the past I haven’t organized them in that way, but with so many arrangements to do I felt like it would save time to have all of the same color in the same buckets.

I went back and forth in my mind between thinking “I spent way too much money on flowers!” to “I’m not going to have enough—I’m going to have go back and buy more!” Yeah, two extremes.

Wednesday was go time! The majority of my arrangements were orders from my BNI group (YEAH!) so those needed to be ready Feb. 13, Thursday morning, because I was taking them to the weekly meeting. So we homeschooled until 2pm, then I put my 2 year old down for a nap and started on the flowers! My oldest 2 helped me with several of the bud vases, which accounted for more than half of the total orders.

It was a little overwhelming at the beginning, even figuring out where to start. So I started on the arrangements that were going to be the most unique in terms of colors and flowers, then moved on from there. I started filling up our kitchen counter and table with the finished arrangements, which we then had to move aside to eat dinner. (Oops! Hey, at least I had put dinner in the crockpot early on, so I didn’t have to stop for that once I got going.)

From there I just kept going and going until they were done, packed into boxes for transport, and ready for the next day. It was very late/early when I got to bed that night. 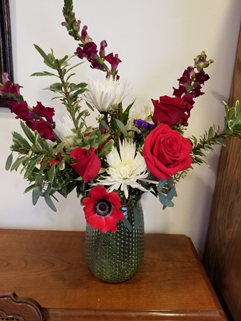 At first I thought buying the purple statice was a mistake, but I actually loved how it played off the purple eye of the anemone!

Between Wednesday and Thursday I received 3 more orders by phone—from my Google listing! Yay! All 3 were for large arrangements. At that point I was thankful that I had built in a bit of a cushion in my flower order. I knew it would be close and I could always just go see what was left at the wholesaler, but I was pretty sure I could make it happen.

I was able to get those 3 orders done Thursday afternoon, which left Friday morning for delivery of the remaining arrangements.

A couple of things I learned from this:

1— I need to get back to work on building out systems for my business, including writing out specific, stem-count recipes for my different arrangements. I am reluctant to do it, in a way, because I don’t want to be tied down to a specific recipe—I like to make each one unique as much as possible. However, as my business grows, I am going to need that structure more and more. It can always be a jumping off point, but for figuring out how many flowers I need to either cut or order, I need hard numbers!

1A—If I ever get employees, this will be even more important! It was great to have in mind exactly what I wanted in the bud vases, so I could tell that to my kiddos.

2—Anything I can do in advance, should be done in advance! The right number and size of vases, all washed and ready to go; even labels pre-made and ready to put on boxes. Anything would be helpful!

3—I love the “everyday flowers!” It was so fun for me to deliver flowers to people and share in that moment of connection—even when it was just at the door for a moment.

3A—I need to rethink my delivery charges, in terms of TIME! I don’t think I’m charging enough for how long it took me, including packing the flowers for transport and actually finding the addresses.

Posted by Linnae at 9:11 AM No comments: