I bought myself some flowers from the grocery store--carnations and tulips.
My husband bought me a pretty Christmas arrangement from Costco the next week.
Ever since he brought it home I was kind of dying to pull it apart and redo it.
So I finally did.
It was a good thing, too!
They hadn't even stripped the stems, so the water was pretty gross and several of the flowers were moldy underneath.
It felt good to pull them all out and create something new with what was useable.
Flowers make me so happy!
Merry Christmas everyone! 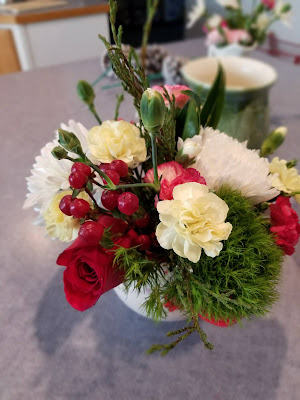 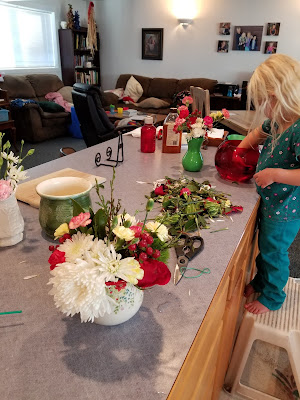 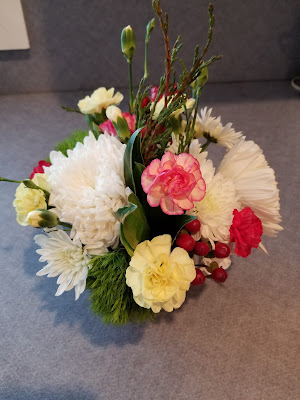 Posted by Linnae at 9:41 PM No comments: 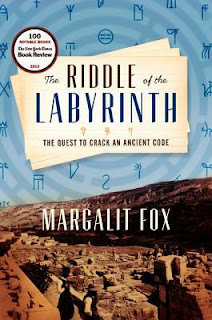 I enjoyed learning about cryptography, and about the Linear B script in particular. The lives of the principal characters were also very interesting.Just the kind of narrative nonfiction I like.
This time around, I would up that rating to at least 4 stars, if not 5. It was fascinating (again--ha!) to read about how linguists can figure out what ancient scripts say. Even more so, I would say, because in our homeschooling history lessons right now we have talked a lot about the hieroglyphs of Ancient Egypt. We read a whole book together on the Rosetta Stone and Champollion, the French man who figured out the language of the hieroglyphics.
With that new background fresh in mind, I was particularly interested in Fox's discussions on the different types of written languages. Some use alphabets, where one character stands for one sound. Some are syllabary (may have spelled that wrong), where one character stands for the sound of a syllable; some are iconographic, where each word is written with a different symbol or picture; and some are mixed. Looking at a ancient tablet with what has to be writing of some kind on it, though, how in the world do you figure out which it is?
As in the case of Linear B, you may not only need to figure out which type of language you have, and what all the sounds mean, you may have to figure out which language is actually written on the tablet. That is, if it's even a known language on there. Along with that, there are so many other things that we take for granted with our known languages written in known scripts: do you read it left to right, or some other way? What are the rules of the language--grammar or otherwise?  So you start to look for clues.
The linguists who work on these ancient languages have to have immense amounts of patience and attention to detail. Kober's work was truly incredible, and it was work! She wrote every character down on homemade file cards (paper was scarce due to the recent war), and then noted where it was in relation to other characters in every word. She had boxes and boxes of little cards by the time of her untimely death. Armed with all of that information she had gathered, she was able to draw up tables of the characters in relation to each other. Her tables are what Ventris based his work on, which finally deciphered the code.
Anyway, we had some great discussions about ancient languages, and what clues are left behind in the language itself for the linguists to track down, like following a rabbit trail in the dark woods on a snowy night. The lives of the principle characters also gave us some good fodder for discussion.
Next, I think we may try our hand at writing messages in an ancient language. There are several books that have examples of hieroglyphics, for example, that would give us a good start.
Posted by Linnae at 9:42 PM No comments: