We read two books back to back in our morning reading time (for homeschool), which proved to be great companion reads. They both had to do with sailing and in particular, navigation at sea. Longitude, by Dava Sobel, was nonfiction, while Carry On, Mr. Bowditch, by Jean Lee Latham, was historical fiction. We understood the troubles of Nat Bowditch so much better, having just read an entire book about finding "lunars" vs. other means of calculating longitude, and even knew some of the technical terms.

If you have access to both of these books, give it a try and let me know if you liked it too! 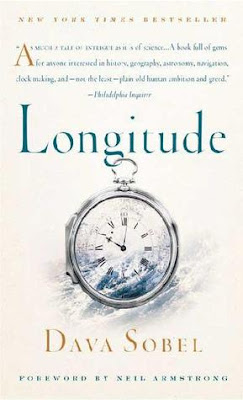 Longitude: The True Story of a Lone Genius Who Solved the Greatest Scientific Problem of His Kind, by Dava Sobel

This one has been on my shelf for at least 5 years. I finally decided to read it to my kids as a way to make it first priority for me as well. Ha! It worked! We made it our way through it, a little each day.

For hundreds of years, the "longitude problem" was the bane of every sailor and captain's existence. It was easy enough to determine which latitude your ship was at, while at sea, but longitude was a whole different beast. Many, many ships sunk and thousands of lives were lost over the centuries due to mistakes in calculating longitude.

Finally the British throne came up with a competition, complete with a hefty award for whomever could solve this problem in a satisfactory way. There was a board overseeing the competition, which ended up going on for a couple of decades. The board members not only received the entries, but they were in charge of testing their accuracy and viability, and perhaps most importantly--doling out the prize money.

For a very long time, prevailing opinion was that the longitude problem would be solved by astronomy. Calculating "lunars" and/or the positions of certain stars became the basis of that school of thought. Then there was another idea completely: using a clock. It would have to be a clock like no other, however. It would have to keep nearly perfect time at sea, despite the constant motion of the ship, and have to be impervious to moisture and salty air.

As far away from astronomy as the workbench from the observatory, this idea was looked down upon by the Board as being almost too practical. Longitude was the realm of mathematicians and scholars, not something that could be solved with raw materials and rough hands--no matter how intricate the arrangement of gears and springs. It took the clockmaker in question--John Harrison--most of his life to perfect his creation and receive his just rewards.

This was actually a good read aloud for school mornings. I mean, I definitely felt smarter after reading it each day! Ha! Truly, though, it gave us some great fodder for discussion. We took it in smaller chunks, and although my kids weren't necessarily clamoring to keep reading each day, it got our minds working first thing in the morning, which was a good thing. That being said, this is definitely geared towards adults. I am fairly certain none of my kids would have picked it up to read on their own--or stuck with it, for that matter. It's well written, but it's got a lot packed in there.

Fascinating subject, really. There's so much that we take for granted about our modern life. GPS systems, anyone? Amazing how one person can make such a difference. One person approaching a problem differently, seeing a unique solution to the problem, then using his skills toward the solution, persisting through setback after setback.

That was the biggest takeaway for me: do what you do best, persist through failure, and you will make a difference. It may not be solving the biggest problem of your time, but then again, maybe it will be.

Now we want to take a field trip to go visit the sea clocks! 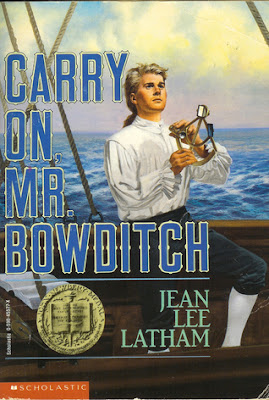 3.5 stars: Great way to visualize and bring to life the history we read about it Longitude.

Nat Bowditch grows up in a family that has fallen on hard times. His father, Habbukuk, used to be a sea captain until his ship was dashed into pieces. Since then he has become a cooper, but has never gotten past his failure at sea. There are many children and only just enough food and clothing to go around. He learns early (from his big brother Hab) to pretend like he doesn't feel the cold in the winter when he doesn't have a coat to wear.

Nat loves mathematics, which makes him unique in his family and at his school. His mind just takes to it, and he can understand and work out complicated problems from a young age. He has dreams of going to Harvard after school. Then his father indentures him to the ship chandlery in town for 9 years. Nine years! His life is over!  Or so he thinks. He doesn't realize it is the start of a lifetime of learning and opportunities. Also, he finally gets enough to eat and warm clothes to wear.

We read this book right after Longitude. It was a great tie-in to all the history we learned about in that book. The problem of finding longitude is one of the central themes of the book. Apparently this was the time period when chronometers (sea clocks) were available, but still very expensive, so most ships still used lunars--which involved taking the position of the moon in relation to certain stars and calculating longitude based on that. Nat's mathematical skill enables him to work "lunars" with extraordinary accuracy, and he even ends up teaching all the men he's sailing with how to work them as well. We highly appreciated the digs at Nevil Maskelyne, who was the rival and enemy of the clockmaker in our nonfiction book. So that part was fantastic.

I feel like the book was probably as accurate as historical fiction can be, so it was good to get a feel for what it would have been like to live back then, in a sailing town.

Here's the thing: so many people died! At first, it was a bit of a blow as we read along. By the end, my kids were taking bets on who was going to go next. It was so bad! I will not name names, but I will just say--do not get overly attached to any of the characters, particularly those who are closest to Nat. Since it was the story of a good portion of his life, the deaths are mentioned in a rather abrupt or cursory manner, then after a paragraph or two we're moving on.

Edited to add: We are not as heartless as we may seem. None of us realized as we read that Mr. Bowditch was a real person. That poor man! Wow. He overcame a lot of suffering. I can't imagine the author would have included all of those deaths if they hadn't really happened. It makes his accomplishments that much more incredible.

"sailing by ash breeze" --this comes up throughout the book, but it's explained early on. When a ship is becalmed, the only way to move forward is by "ash breeze," meaning--get out the oars and row! The oars were usually made of ash wood. Nat spends most of his life sailing by ash breeze, finding his own chances for learning, and studying on his own--everything he can get his hands on--as his hopes and dreams take a very long time to realize.

"she has eyes in the back of her heart"

"I'm just like a chair you stumble over in the dark," Elizabeth said. "It isn't the chair's fault, but you kick it anyhow." ... "Your brain. It's too fast. So you stumble on other people's dumbness. And--you want to kick something."