For the Armchair Adventurer

Two of the books I've read recently have been about daring and adventurous escapades: Mystery of the Nile and Mountain Rescue Doctor. 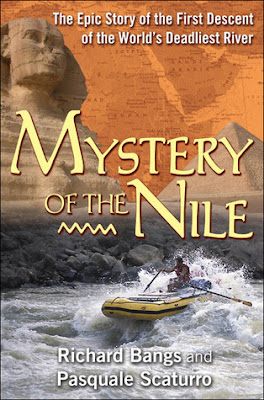 Mystery of the Nile: The Epic Story of the First Descent of the World's Deadliest River, by Richard Bangs and Pasquale Scaturro

Many people have attempted to go down the entire length of the Nile River, and several have died in the attempt. Pasquale Scaturro and his little band of explorers finally made it!

They started way up in Ethiopia, where it was really just a trickle, down spectacular and dangerous waterfalls and rapids, and past crocodiles, hippos, bandits, and soldiers.

This was a great read, especially coming on the heels of our homeschool study of Ancient Egypt, and the surrounding regions. The adventure wasn't all exciting rafting through dangerous waters. A good portion of it was baking hot and boring, with the main threat coming from Sudanese militia and river side bandits.

It was interesting to get a glimpse of the interpersonal dynamics of the group, as well. Shared danger doesn't necessarily bring about close friendships, and Bangs pulled no punches discussing the problems that came up between Scaturro and his fellows. Satisfying ending, though--realizing that reaching an enormous milestone like that is as much a mindset as anything else. Preparation and the right equipment can only get you so far. At some point you may need a "fixer" to get you signatures or the needed paperwork, or just the wife of a inn owner that knows a general. It wasn't all just physical skills needed, is what I'm saying. People skills, negotiation, keeping your team from throwing each other to the crocodiles--all of that was part of it, too. 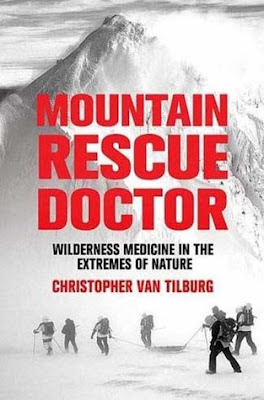 4 stars: Stories to talk about with my teenager.

Tilburg has forged his own path in the medical community, combining a love of outdoor sports with opportunities to help people in trouble. An ER doctor as his "day job," plus an avid hiker, biker, and skiier himself, he is well prepared physically and mentally for the rigors of rescuing those who have slipped or strayed off the beaten path.

Exciting stories of his work up in the mountains. Extremely challenging situations and dedicated volunteers at the ready for those who get hurt or sick or lost. Reading this, I was so grateful for Tilburg and others like him, who are willing to risk so much to help people that cannot help themselves.

My oldest son read this at the same time as me, and we had a good time talking about the various stories.

I had a hard day a while back, and my sweet husband went to the flower shop in town and talked them into selling him a big bunch of loose flowers.

He came walking in the door with them, and said they were to help distract me and bring me joy.

He knows me well!

They did both jobs very well.

I gave the one on bottom to a friend and kept the purples to enjoy here at home. 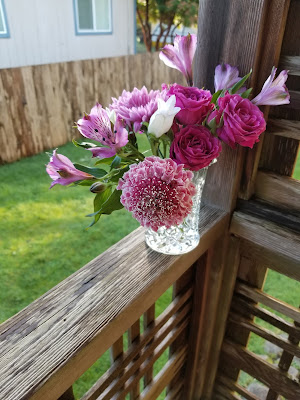 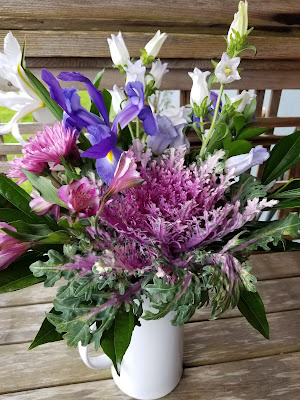 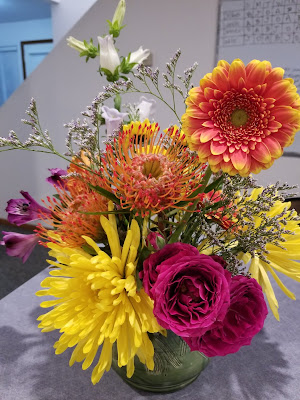 Posted by Linnae at 9:35 PM No comments: 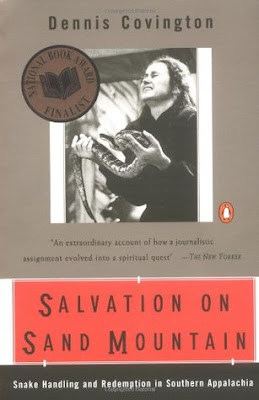 Covington originally went down to Scottsboro, Alabama, to cover the trial of snake handler Glenn Summerford, a man accused of trying to kill his wife by making her stick her hand into a cage of live rattlesnakes.

His brush with this offshoot religion fascinated him. He went to a service or two. He began getting to know the believers. As he went further down this path, he even researched his family history. He felt such a kinship with these people--something more than could be explained away as a bystander.

What began as a journalism assignment ended up as a soul-searching journey.

I've had this one on my shelves for a long time. I can't even remember when I read it last. A conversation with my kids reminded me of this book, and I decided it was time to re-read it. It raised so many questions in my mind; questions about the ins and outs of this faith and the people who practice it. That's one reason I liked it. I'm still pondering on it a couple of days later.

Covington's account is compelling. I am a religious person. My expressions of faith are very different from those of the snake handlers. This book makes me wonder, though, how much we might have in common, if we were ever to sit down and have a deep conversation together.

For older teens and adults.

Posted by Linnae at 7:43 PM No comments: