I have been enjoying my memoirs and biographies so far this year! I've actually read more than my goal of 1 per month so far, though I don't promise to keep that up! ;)  I've been touched by the personal experiences of the people I've read about, and even learned a few things along the way. Always a plus.

Here's what I've read so far, starting with most recent: 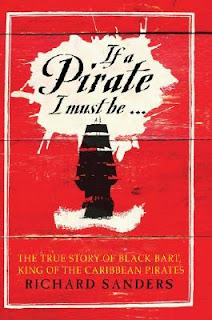 If a Pirate I Must Be: The True Story of Black Bart, "King of the Caribbean Pirates," by Richard Sanders

This was a fascinating account of the career of Bartholomew Roberts, the pirate. A shrewd man, who pulled off several bold plunderings right under the noses of British and French Navy warships, and got away with it. He didn't drink rum, and banned gambling and women on his ships. Not that he was a saint, by any stretch, but the author points out that he and his crew rarely killed anyone from the ships they robbed. (The one massacre that happened was against his orders.)

I learned a lot about piracy as it was back then. What enticed men into it? Many of the sailors at that time had been forced into joining the ships they were currently on, for low or no wages, and little food. A pirate's life offered plentiful food, an equal share of the loot, and lots of free time to drink rum punch, fight, and carouse. For a man like Roberts, it was probably the power and notoriety that seduced him as much as anything: at one point he commanded upwards of 200 men and his name was known in fear throughout the Caribbean and coasts of Africa--neither of which would have ever happened coming from his lowly station in life.

It seems there was an awful lot of private agreements between merchant ships and pirates then, as well. Roberts would cut deals with the captains he liked and sometimes even leave them most of their cargo. Meanwhile, the Navies' attempts to reign him in were pretty pathetic until right at the end.

* * * * *
Well-written and carefully researched. Sanders did a good job at giving enough details and information for understanding what was happening, without bogging down the narrative. As you might expect, there was quite a bit of excitement, in the way of chases, narrow escapes, and revenge. Several times Sanders pointed out places where the legends were probably incorrect, based on his research, which I appreciated.

As a sidenote: I couldn't help thinking--"The Dread Pirate Roberts was a real person?!" Any Princess Bride fans out there? Ha! Shows how much I knew about pirates. (Though he did not retire in comfort and pass the name down. He died in battle.)

Content: Several brief descriptions of torture, beatings, etc., not to mention ships burned and so on. A little bit of language.


[Yes, I'm aware of the irony of my 2 choices this month! A pirate and an Apostle. Their lives couldn't have been more different.] 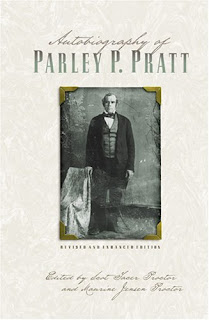 5 stars: Inspiring and testimony-building account of a modern-day Apostle--who happens to be one of my ancestors!

This one has been sitting on my shelf for years! I'm a descendant of Parley's, three greats back I believe. He joined the Church of Jesus Christ of Latter-day Saints as a young man and was called as an Apostle not too long after that. He spend much of his life on missions for the church, preaching, writing tracts and books, and defending the gospel at every turn.

He was also a polygamist and had 12 wives and 25 children, many of whom had high praise for him. He loved his family deeply and did his best to care for them all. He died at age 50, murdered by his last wife's abusive ex-husband. (I didn't know that was how he died. At all.)

He was an eloquent and descriptive writer, with many poignant insights into what the early Saints went through. He himself was falsely imprisoned and spent many long months in a jail in Missouri, before escaping and making his way back to his family. His responsibilities on a mission usually included editing and writing a newspaper for the Saints in that area.

* * * * * *
One thing I was impressed by was Parley's dedication to the Lord. Time and time again, he built a home, cleared ground and cultivated a farm, only to leave it behind. The first few times he did it willingly, feeling called to preach in another location. Other times he was forced out by mobs, the homes, outbuildings, and all improvements a loss. He just kept going and starting over again...and again. Throughout all the trials and hard things, he stayed faithful to the very end.

Another thing that struck me was his humility. At least a couple of times he talked about being "severely chastened" by Brigham Young.  Both times he said he was in the wrong, this correction would make him a better man, and he was thankful for it. Wow. Talk about humble. It says he was fast friends with President Young and they often stayed in touch through letters while he was away.

Lastly, his testimony came shining through in every chapter, sure and bright. He participated in and witnessed many miracles throughout the course of his ministry, and brought many hundreds--if not thousands--of people into the church, through his preaching and writings.

My one quibble with the book--I wish there had been more about his home life. 12 wives! There must have been a lot going on there! Every so often there was a letter to one of them, but other than that, there was not much mentioned beyond how much he missed them in his travels, and how dear his little ones were to him.

It was a long book, more than 500 pages, which is probably why it took me so long to pick it up! I read it before bed at night, off and on, over about a month.  If you're interested in early Mormon history, and have some time on your hands, I would recommend it. 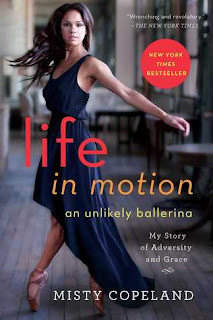 Life in Motion: An Unlikely Ballerina, by Misty Copeland

The story of Misty Copeland's life: coming from a struggling impoverished family, to discovering dance, then her amazing rise to the top of her profession.

This was well-written and easy to read. She didn't shy away from the hard or potentially embarrassing parts of her story, which must have been hard. It felt very honest, and I appreciated her candor. I also thought she did a good job explaining her thoughts of certain situations at the time they happened, then giving her more mature perspective now--particularly in regards to her relationship with her mother.

It helped open my eyes to the world of ballet, which is a world I've never really explored much. 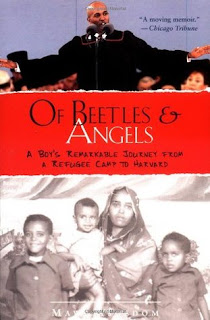 Of Beetles and Angels: A Boy's Remarkable Journey from a Refugee Camp to Harvard, by Mawi Asgedom

Inspiring true story of one boy and one family's triumph in a new land. I especially loved the message that hard work plus treating people right makes for success in any endeavor. Short chapters and engaging storytelling make it right on target for the elementary to middle school set.

Content: clean
There was nothing described in a way that made it inappropriate for a middle grade audience, but keep in mind his life experiences--fleeing soldiers, refugee camp life, and so on--as you decide whether to share it with your kids. 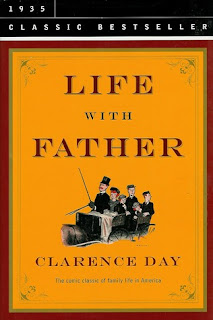 Life With Father, by Clarence Day

Clarence's father was a singular man, who viewed any type of disorder, illness, or irregularity as weakness of character. His wife and family were a constant puzzle and trial to him. But he soldiered on--loudly.

Had me chuckling at several points. I want to see the movie now!