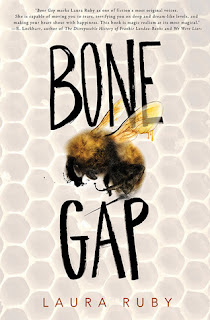 4 stars: Multi-layered, with complex characters, and a touch of magic.

Finn has always been a bit of a misfit in the small town of Bone Gap. "Moonface," people call him, or "Sidetrack." He sees things a bit differently than everyone else. He can hear whispers in the rustling of the corn. He's a dreamer.

His older brother Sean, on the other hand, is the town hero. He gave up his dreams of becoming a doctor when their mom left town--gave them up to stay home and take care of Finn. He's an EMT, stoic, responsible--heck, even the Rudes like him. (They're a band of brothers who occasionally beat on Finn for laughs.)

Then there's Roza, a Polish immigrant who appeared in the brothers' barn one day; wounded, mysterious, and very, very, beautiful. She has not had it easy, being so beautiful. People expect things of her or hate her for it or lust after her, and basically, there's not one person in America that sees past it--until she meets the brothers.

It's obvious that she needs a place to stay, and they happen to have an [empty] small apartment out back, so she stays. For awhile. She cooks delicious food for them, and teaches them how to grow a garden, and seems to be falling in love with Sean....or Finn--the townspeople are not quite sure which.

Then one day she goes missing. Finn saw it happen, saw the man who kidnapped her, but can't really describe it in a way that anyone else understands. Maybe she wanted to go. Maybe Finn helped her to go. The stories and the blame circle around and around until all anyone knows is that she's missing--perhaps voluntarily. Sean and Finn carry on, but their lives have become stilted, their conversations just skimming the surface.

Meanwhile, Finn pursues an angry girl named Petey, who helps her mother keep bees and who won't believe Finn when he says she's beautiful. If Roza was the very definition of beauty. Petey would be listed under its antonym, according to everybody else in town. But Finn has never been like everybody else.

Underneath all of that, Bone Gap is not just an ordinary little town in the middle of the cornfields. There are unexplainable things that happen at times: a black horse just appears one night in the barn--with hay. The corn whispers. The crows talk--sometimes.  A beautiful girl goes missing from a crowd of people and yet the one person who saw it happen can't really say who took her or how it happened, just that it did. So that one person decides it is up to him to find her.

This is a book about perception; about the way we see our enemies, and the way we see those we love. It's about what it means to truly see anyone at all. It's about the way we perceive the events of our lives, and what is the Truth. It's about beauty--skin-deep and otherwise--and bravery. It's about small-town living, in all its gossip-mongering and solidarity. The Persephone myth twines around and through it, and there are glimmers of magic that can't help breaking through the surface on a moonlit night.

*****************
I have to admit that I was a bit wary going in to this one. I wasn't sure what I was getting myself into, and reading reviews didn't help all that much. You see, I don't do horror--never have, never will; and for some reason I had the idea that this one was going to veer into that territory. It took more than one person listing it under "wholesome reads" for me to decide that it would be okay.

I am glad I took a chance on it, and I'm happy to report there was nothing in it to give me nightmares. One of the critical reviews I read said that underneath the magical realism, nothing really happens. That has some validity to it. This is definitely a character-driven novel, rather than a thriller. However, I enjoyed watching the characters slowly come into focus. As each piece of the puzzle fell into place for the characters, the overall plot would come into focus that much more also, until by the end it was nearly a complete picture. (Some of the edges may have been a bit fuzzy still.)

Some favorites: the Night Mare and Finn's love letters/fictional college application essays. Also, the quote at the very beginning of the book: "The nice part about living in a small town is that when you don't know what you're doing, someone else does."--Anonymous

It has left me with a lot to think about, and a few lingering questions. I'll bet it would be a fantastic book club choice--there are so many layers to it, beyond the questions of beauty and perception. What really happened? How much do you take at face value, and how much was symbolic? Was someone to blame? Can someone please explain Charlie Valentine to me?! If you can't tell, I would really like to discuss it with someone, so if you read it--please chat with me!

Content note: There is some language (mostly from the Rudes), and one sex scene--between the teenagers. My library shelves it in the Young Adult section, but I would say it's more for adults.
Posted by Linnae at 10:48 PM