Growing Up & Dealing with Change


I've read a couple of books in the last week that have focused on children growing up and dealing with important changes in their lives: in particular, changes with parents.  Both feature an older brother and younger sister with close friendships. 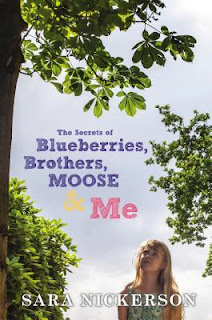 The Secrets of Blueberries, Brothers, Moose and Me, by Sara Nickerson

Missy's parents have gotten divorced. Even though it's been about a year now, she and her older brother Patrick are still having a hard time with it. Then her dad tells them about his engagement and Missy loses it. She is so angry that she decides to sabotage the wedding any way that she can.

Meanwhile, she and Patrick see an ad in the newspaper for a summer job: a local blueberry farm is hiring kids to pick berries. They really want to do it. It takes some convincing for them mom to let them go, but eventually she agrees--as long as they stick together and watch out for each other.

Missy really loves the fields, the blueberry plants, and even picking. Patrick seems to like it too, at first. Then he meets a girl and pretty soon he's more interested in goofing off with the her [and the other kids] than staying in the row with his sister and picking blueberries. With her 2 best friends off at camp, her best-friend brother missing in action, and her dad getting re-married, Missy doesn't know who to turn to anymore.

Before long, her dedication and hard work catches the eye of the owners, and she is allowed to help pick in a special field that none of the others ever see. There's a mysterious feud between the 2 brothers who own the fields, and she's determined to get to the bottom of it. It's a summer for growing up, and learning to handle all the changes in her life, as hard and wonderful as that can be sometimes.

* * * * * *
This book had a lot of heart. It covered things that many kids experience: divorce, changing friendships--inside and outside the family--and learning to rely on yourself and do what you know is right, despite what choices other people are making. The blueberry fields made for a unique setting, but there were still a lot of elements that were familiar--family time, playing at the lake, etc.

I especially liked how even though there were rifts or fights in almost every important relationship in Missy's life, they were all resolved one way or another. Just like in real life things didn't stay the same, necessarily, but they were able to work through their differences. The blood feud between the blueberry farm brothers was a stark contrast to this idea (which was probably why it was in the book), but I didn't feel like it was hammered in or anything. It was presented as another path that conflicts can take sometimes--but certainly not a happy one for those involved.

Also, Missy's parents handled being divorced in probably the most ideal way. They were not pitting the children against each other; they talked about and agreed on what was best for the kids; they communicated amicably as needed. I know that's not the usual case, but it never hurts to have an example of what it could be like.

Due to its length, I would say this one is probably for the higher range of middle grade readers, so maybe 10+, but content would be appropriate for younger as well. 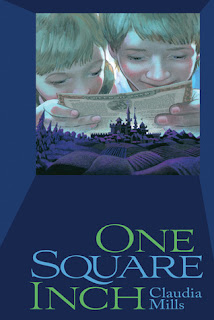 One Square Inch, by Claudia Mills

4 stars: This is an important book for children dealing with a family member's (un-medicated) mental illness. Well-written and emotional.

Cooper and his little sister Carly are visiting Gran-Dan with their mother when he gives them deeds to square inches of land in the Yukon, leftover from when he was young. Their mother sleeps almost all the time, but they get along okay.

Once they get home, their mom can hardly even get out of bed at all, it seems. They watch out for each other the best they can. She does manage to get out of bed to take them to school on the first day.

Then Cooper notices a doctor's appointment on the calendar, and some pills. After awhile, he starts to notice a difference. His mom is up and around, and actually seems to have energy to make food and care for them.

Cooper and Carly make up an imaginary world called Inchland, based on the old deeds from their grandfather. Carly's the storyteller and Cooper draws maps, house plans, and scenes from the countryside.

As the fall wears on, however, Cooper's mom begins acting more and more erratic. She buys bags and bags of fabric for a quilt that never gets made. She doesn't pay the bills or clean the house, yet she signs up to make the scenery for Carly's class play....then just lets the unfinished scenery sit and sit. She's up all hours of the night, listening to music, and organizing the cereal. It wouldn't be so bad, perhaps, if they had a dad around to take over, but it's just them and their mom.

Cooper senses something is off with his mom, but he doesn't know how to even talk about it to any of the grownups in his life. Gran-Dan is so critical that Cooper can't open up to him over the phone, and he just can't seem to find the words to tell either of his favorite teachers. Cooper does his best to cope, but the problem is quickly growing beyond him....until one day it all comes to a head.

* * * * *
This was a slim volume, but the story packed a punch. My heart ached for Cooper; trying to take care of his sister, trying to deal with his own challenges, and then to have his mom's mental illness on top of everything else. I don't have very much experience with bipolar disease, but the portrayal rang true. I was so glad that Cooper was finally able to confide in the mom of one of his best friends, so that his family could get the help they all needed.

This is one I'm not planning to read with my kids. If one of them picked it up on their own, I wouldn't stop them from reading it, but I would definitely make it a shared experience. I would say it's aimed at a small but important audience; primarily, children who have experienced a parent or close family member with mental illness, though it would also be valuable for anyone who works with children.

It's not an easy story to read. There were some very raw, strong emotions in the book, particularly when Cooper's mom failed to follow through on all the things she had promised. Gran-Dan's strained relationship with Cooper was pretty hard for me to take, as well. Mills did a good job of transmitting to the reader that sick feeling in the pit of your stomach when someone who you're supposed to be able to depend on is not dependable at all. Although the ending wasn't wrapped up in a neat bow, it did leave me with some hope--that things would get better, and that Cooper wouldn't have to try and deal with it all on his own anymore.

I'm glad I know about it. If you have experience in this area, I would be interested to hear your take on it.

Recommended for 3rd grade and up, with a grownup to talk it over with.