A Couple of Offbeat Garden Books


I received 2 books on Mother's Day with connections to the garden that I have quite enjoyed. Neither one was a typical gardening book of the "plant this here" variety. Each took its own tangent, which led to some delightful discoveries. 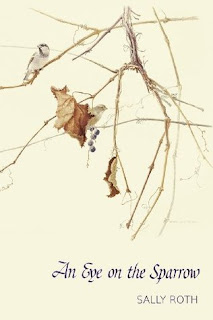 An Eye on the Sparrow, by Sally Roth

4 stars: An in-depth look at all the birds mentioned in the Bible and why they would have been the ones included. I found it completely fascinating!


I really like Sally Roth's bird books, and this one has been on my Amazon wish list for practically ever. I don't know why I haven't just broken down and bought it before now, but hey--I was very happy to see it as a gift, so hooray! I have her book The Backyard Bird Lover's Field Guide, already, which I also highly recommend.

At its core this is a bird book, but it is quite unique. It's all about the birds mentioned in the Bible, and why those birds in particular would have been used either to illustrate a point or in their specific roles in the various stories.

This was just so intriguing to me. Roth is not even Christian, but she loves birds and knows an awful lot about their behavior. For this book, she went through the Bible and pulled out every reference to birds, then looked at it from a biological viewpoint. For instance, why would it have been a raven that fed the prophet Elijah during the famine?  Why are cormorants and bitterns mentioned in relation to the destruction of Israel? What type of dove would it have been that Noah released from the ark?

One thing I really appreciated, aside from the insights about the birds, was that she wasn't out to prove or disprove the Bible itself. She let the stories and verses stand as written, and mostly just focused in on the birds. Many of the birds mentioned have counterparts here in North America and she relates the differences between the ones we're familiar with and the Middle Eastern species, along with many other tidbits. Like I said. Just fascinating!

I will say that it's probably better as one to dip into here and there. I read it straight through and some parts got a little repetitive, as one verse mentioned several birds with similar traits.

I have already told several people about this one. Now I just have to decide if I'm willing to lend it out or not! 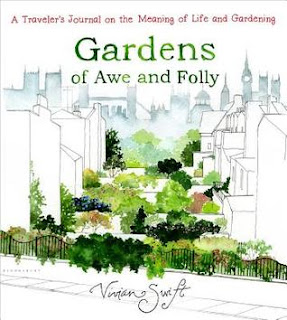 Gardens of Awe and Folly: A Traveler's Journal on the Meaning of Life and Gardening, by Vivian Swift

4 stars: A book to savor and get lost in.


First off, this is just a beautiful book. The watercolor illustrations are exquisite. Every page has at least one illustration and most pages have several. The entire book was typeset by hand by the author. It does have the feel of peeking into a gifted artist's journal, complete with scenes real and imagined, little maps, sketches and doodles.

In her very brief introduction, Swift explains that if all you ask of a garden is "What?" then all you're going to get is planting list. It's by asking other questions that you begin a conversation, and that's what this book is--conversations with 9 very different gardens from vastly different places. Four are located stateside, 2 in England, 1 in Paris, 1 in Brazil, and 1 in Morocco. Each garden serves a different person and is completely different in design.

By the way, you should know that she has a whole section called "Why Native Plant Societies Are Barking Up the Wrong Tree," with quotes and illustrations to make her point. She hammers it pretty hard, without so much as a mention to the opposing view. So if you feel pretty strongly about your native plants, you may get very angry and throw the book--as apparently some other reviewers on Amazon did.  I am moderate in my opinions on this subject, so her views didn't bother me and I actually thought the quotes were quite interesting. Just a heads-up, because I know it can be a heated topic!

She's also pretty much anti-Japanese garden for anywhere but Japan. In fact, she's not too keen on the Japanese ideal garden in any place. Though I do not share her dislike for this type of gardening, it didn't ruin the book for me or anything. I think there's plenty of room in the gardening world for both viewpoints. As much room as your own backyard, in fact. So go forth and garden how you please! (And so will I.)

Anyway, this was like a meandering stroll through lovely gardens, with a good friend by my side telling me interesting stories. Highly enjoyable.

I've got another one of hers on my wishlist now!

Do you keep a journal? Or wander through gardens talking to yourself? :)
Which of these two would you be most likely to pick up?