A Handful of Middle Grade Books


On my last trip to the library, I picked up several J-level books that caught my eye, and I've been working my way through them. One reason I like them is for their shorter length--I can read them between other things in my day and still finish them in a reasonable amount of time. 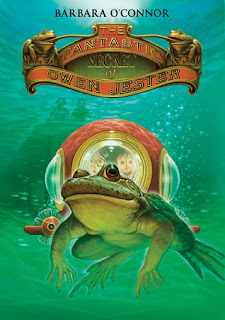 The Fantastic Secret of Owen Jester, by Barbra O' Connor

3 stars: Just enough within the realm of possibility to catch your imagination!

Owen's family has fallen on hard times. His dad lost his job at the hardware store, and they've had to move in with his grandfather (very sick) and his grandfather's live-in nurse Earlene (very clean and very super extra grumpy.)  He does have a few good things going for him, though. He FINALLY managed to catch the huge bullfrog he has been stalking for weeks--he named him Graham Tooley-- and also, his buddies Travis and Stumpy are almost always up for some mischief fun. If only know-it-all Viola from next door would just leave them alone!

Then one night, Owen hears something unusual as the night train passes by their town. It's a thudding sound, and a tumbling sound. He is dead sure something fell off that train, and he is bound and determined to find it. Never mind that he's been forbidden to go down to the tracks--that's never stopped him before, has it?

This relationships in this one felt so real. Owen is a good kid at heart, but put him in a house with someone like Earlene, and it's almost like he can't stop himself from causing trouble--she's pushing so hard he's just got to push back some.  His friendship with Stumpy and Travis also felt very genuine--they get tired of each other, they get bored, sometimes 2 gang up on the other one and get him to do something he might not have otherwise--but most of the time they work together on projects.

Likewise, their bullying of Viola is all too real. They are so mean to Viola! Usually one saying mean things and the other two laughing and egging on their buddy. It never progresses much beyond that, though they do throw things one time.  She seems to not care and keeps coming around. Owen eventually changes his attitude toward her some but it was a little hard to read. I get it--she's a pest and they're mostly trying to ditch her, but yeah. That wasn't my favorite. Very real, though. I think most kids would relate on some level, to one side or the other.

The fantastic secret itself is very fun. There are some problems associated with using what they have found, and I really liked how they solved those problems. Owen does grow up and mature some through the book, in many ways.

I want to read some others by this author.

The fantastic secret brought to mind Henry Huggins' and his lifetime supply of bubblegum! Didn't that fall off a train as well? 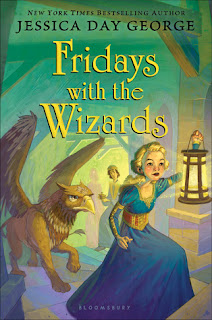 Fridays with the Wizards (Castle Glower #4), by Jessica Day George

3.5 stars: Enjoyable character-building, but left me with more questions than answers.

Celie and gang have their hands full, back at the Castle. There's baby griffins hatching, and an unexpected wedding to plan. Then the evil wizard Arkwright escapes from the makeshift dungeon they were keeping him in!  Before long, they realize that he must be hiding somewhere in the Castle itself, which leads them all on a hunt through secret passageways galore.

* * * * * *
Celie's worries, attitudes, and growth seemed spot-on with this one. I liked how it showed even in close families, there are issues of miscommunication or jealousy or misunderstanding--as well as how they resolve those issues. The griffins added a lot to the story, as well.

The Castle is seeming more and more like a sentient building--I'm ready for some answers on that score! (Though, perhaps with the visiting wizards doing their thing that will happen in the next book...?)

Glad I found this one! 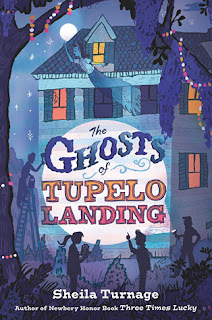 The incomparable Mo Lebeau is back, ready to solve some more mysteries, along with her reluctant partner Dale. Also, they have to figure a way out of some trouble, which came by way Miss Lana accidentally buying a haunted inn at an auction. Also, more trouble, by way of signing up to interview the ghost for their 6th grade class report. It should be noted that Dale is deathly afraid of ghosts.

Mo's determined to get to the bottom of all this, even if it takes digging into the past that some people don't want dug into. Who is this ghost and why has she been hanging around all these years? More importantly, what can they do to help her move along?

* *  * * *
I don't generally go for ghost stories much. I am a total ghost-story wimp. I do not like them one bit.
This one, however, was okay. One of those with a few sorta-scary moments in the beginning, that turns bittersweet as they figure out who it is and what happened to her.

It's not just a ghost story, though. This is the continuing story of spunky, determined, hilarious, Mo Lebeau! She's in love with Lavender, Dale's older brother, and she pretty much asks him out every chance she gets. (He just laughs at her.)  Dale is her perfect foil. The other characters in town are just that--characters. They each have their quirks, that everyone knows about and kind of just lives with. Miss Lana and the Colonel are awesome.

This book was just funny! There was one part in particular where I laughed out loud, drawing curious looks from my husband across the room. Especially when I kept laughing for awhile every time I thought of it.

I would say read Three Times Lucky first, if you haven't. It will give you a much better background for appreciating all the goodness going on in this one. I just found out on Goodreads that there's a third. Sign me up! I'm with Mo! 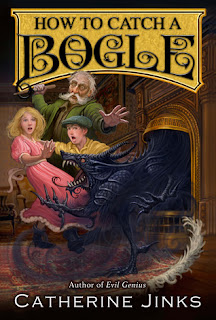 How to Catch a Bogle (City of Orphans, #1), by Catherine Jinks

3.5 stars: Well-written; a bit darker than I'm used to for middle-grade books.

Birdie is an orphan who assists Alfred the Bogler in killing the various creatures that live in dark places and eat children. You see, she has the voice of a angel, and she also happens to be very light on her feet, in order to jump out of the circle of salt just as the beast steps into it. Getting to the bottom of it, Birdie is bait. For the bogles.

Though often morose, Alfred is kind to her in his own way, and Birdie is quite content with her lot in life--even proud of the work she does. Then a rich lady--a Miss Eames--takes an interest in them, Birdie in particular, and their work also. She studies the creatures of myth and folklore--and is quite taken aback to find that they are not as mythical as she had supposed.

Unfortunately, there are other sinister plans afoot that Birdie knows nothing about, but happen to feature her and Alfred quite prominently. Birdie's determined not to let her courage falter, no matter what happens. After all, if she can sing to a bogle, she can handle the worst of what mere humans may have to dish out.

A grittier side of London than I usually see in children's books, with scarier monsters, to boot. The bogles are all different, but all terrifying, even to our brave Birdie. She has several close calls, and there's talk of those who did get eaten at various points in the story.  I enjoyed the interplay of the various characters from the underbelly, along with Miss Eames, and those between the two in station. It reminded me in some ways of Oliver Twist, with its cast of characters and setting, except Birdie was in a much better situation with Alfred as her protector than poor old Oliver ever was during his sojourn on the streets.

I don't plan to give it to my oldest. I am pretty certain it would be too dark and intense for him (he's 8.) By the time it probably wouldn't bother him (10? 12?) I don't know if he would be interested anymore. So there is that--I'm not sure who the audience would be for this one. Middle-aged moms, perhaps? :) Well-written. I will probably read the sequels if I happen upon them, but don't plan to seek them out.


Have you come across any good J fiction lately?