Reading with My 9-year-old: The New Kid + Going Where It's Dark

These two books were both full of a lot to discuss. I was glad I had read them with my son--though he finished them way before I was able to fit them in. That's okay. Even though it had been awhile for him, we still had some good conversations about them.

Content-wise, they were definitely a step above some of the others he's been reading, like Diary of a Wimpy Kid. More serious overall, and bigger issues at stake. I still felt like they were appropriate for middle grade, but both tended toward the older side of the spectrum. Since I wouldn't have picked up either on my own, it was good for broadening my horizons, too! :) 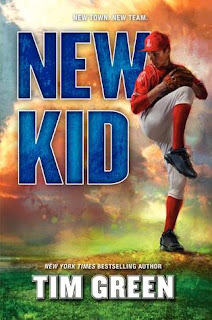 Life hasn't been easy for Tommy, especially ever since his mom died, and it has just been him and his dad. It seems that whenever he starts to really get in a groove at school or on the baseball field, his dad decides it's time to move. Again. These aren't just any moves, either. They are "pick a random town on the map, change your name, don't ever talk about your past" kind of moves.

When his dad pulls him out of a championship baseball game, Tommy has just about had enough. In the new town he goes by Brock. There's only a few months left of school and he's hopelessly behind. He's supposed to just keep his head down and do what his dad says, but he's ready for some answers. If he dares ask the questions. His dad has never been the real warm fuzzy type.

Then a new "friend" (the term is negotiable) gets him in trouble with the baseball coach. Except instead of really coming down on him, the coach gives him a chance to redeem himself--by pitching for a community baseball team that's historically down on its luck. Brock is pretty sure his dad will never agree to it, but he gets up the guts to ask anyway. He really wants this. If only they can just stay put for awhile.

* * * * *
This one had a lot of high-stakes tension in it. Brock's relationship with his dad feels like it's teetering on the edge of an explosion and you can just feel the pressure building throughout the book. Well-written characters. Many of the characters are dealing with difficult situations, in addition to what Brock's going through, including abuse/neglect, alcoholism, etc. While they are not glossed over, they are not all explored in depth either.

I would recommend this for older middle grade students or young teens. So the tweenagers, I guess! I think it may have been a bit intense for my 9-year-old. At least, he hasn't wanted to read any of the sequels at this point. I was glad I read it with him, so we could talk about several things, including Brock's relationship with his dad and his decision in the end. 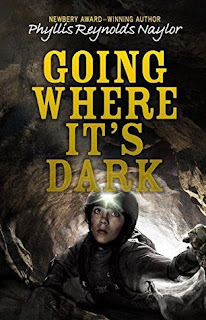 Going Where It's Dark, by Phyllis Reynolds Naylor

4 stars: I had to keep reading to see how this one came out!

Buck is a boy with some problems. First of all, he stutters: painfully, almost constantly. He dreads any type of public speaking, including giving answers in class. He's picked on by some other boys for it. Secondly, his best friend moved away and now he has no-one to go caving with.

He lives for the thrill of discovering something new underground. After all, how much land above-ground has been explored? All of it. At least around his town. Inside a cave, though, you could be the first person to ever see what's down there. The last frontier!

The thing is, he's found a new cave--one that looks like it could be incredible on the inside. He's not stupid. He's never gone past where he can still see the entrance. Yet it calls to him. He's just got to get in there and explore more! He's going to need better equipment though, (which takes money), and a whole day off. It's going to take some planning.

Over the course of several months, many issues come to a head for Buck and somehow twine around each other in unexpected ways, leading up to a dramatic conclusion.

* * * * *
Characters with depth, including many of the minor characters. I could sympathize with Buck through so many of his experiences. He was a person to root for--trying to do the right thing, persevering even when it was hard. His stuttering therapy was fascinating to me and added another layer of interest to the story.

As for the caving, I have really only had one experience "wild caving," which I did not enjoy. Even so, I could begin to see some of the allure from Buck's point of view. Bonus: reading the descriptions in this book made me feel like I had almost been there, so I got to experience it again--without actually slithering around in the smelly mud, banging my head on rocks! (Yup. Proud to be an armchair spelunker.)

After I had read this one, my son and I talked at various times about caving, bullying, and stuttering. So that was a win. Lots of good discussion points.

What have you read with your kids lately? Any good recommendations for us?