Friends, I'm slipping! I just sat down to read a book this evening that I've renewed from the library a couple of times already. I was on page 2 when I realized that I have read this book. Recently. It can't have been more than a couple of months. Nothing about the cover, the blurb on the back, or even the character's names rang a bell until I actually opened it up and started reading.

Not a great sign! I hadn't reviewed it anywhere, or even wrote down when I finished it, which I try to do with every book I read. Now you know why I review the books I've read. Give me a couple of weeks and POOF! They're gone. Oh dear. I may be losing my marbles. Hopefully I will find them again once we have moved!

At least these 4 books I actually remember reading. Sheesh! 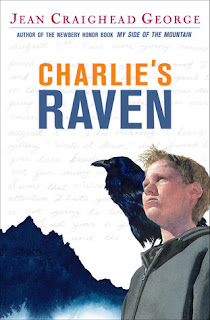 3 stars: At times the plot and characters became secondary to observations of the raven, but still enjoyable.

Charlie loves spending time at his grandparent's house right up close to the Teton Mountains. He spends all of his summers there, ever since his family moved to town, and soaks up all he can of the natural beauty and wildlife. His grandfather was a scientist and naturalist, but lately his health has deteriorated.

Charlie had heard of the old Native American story that Raven can heal people. He's determined to find a raven to heal his grandfather. He actually finds one, too--a chick he takes from its nest and names Blue Sky. Young Blue Sky is not only smart, he does seem to be helping Granddad regain some strength and vitality.

As he learns about raising a raven, and protecting him from all sorts of danger, Charlie also tries to determine if ravens are good or bad.

* * * * *
Blue Sky is really the star of this book--all the other characters, including Charlie, are supporting players. Not as strongly written as some of her others in that respect. Fascinating and entertaining to observe raven behavior along with Charlie, though, and find out how incredibly smart they are.

I always feel like I've learned something valuable after reading a book by Jean Craighead George. 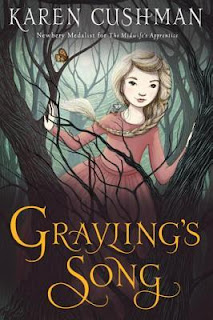 3 stars: A magical quest for a young girl and her companions.

Grayling is the daughter of a witch. Her mother has always been extra competent and many, many people have come to her for remedies, spells, and advice over the years. Grayling sort of feels like the hired hand most of the time. Despite her mother's many virtues, she has never been what you might call nurturing. She constantly gets after Grayling for her daydreaming and work-avoidance tendencies.

Then her mother is turned into a tree. It becomes Grayling's task to find her mother's grimoire, or book of spells, and come to the rescue. Grayling is very reluctant to go adventuring, but she does anyway. Along the way she discovers that it's not just her mother who has been turned into a tree. Witches and enchanters of all sorts have been affected by the same dark magic.

Before long, Grayling has fallen in with some companions who will prove invaluable on her journey. The most important person, though, will be herself--once she figures out where her own strengths lie and gains some confidence.

* * * * *
I liked this one, despite the formulaic feel to it. It had some interesting and entertaining characters. The villain was not who I was expecting, but once I knew who it was I had a hard time believing that character could really create that much trouble. Grayling had some believable growth, which was satisfying.

Several reviewers say this one is great on audiobook, read by Katherine Kellgren. I may give that a try and see if I like it better! It does seem like it would lend itself well to reading aloud. 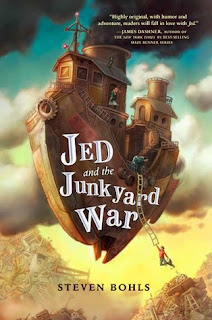 Jed and the Junkyard War, by Steven Bohls

Twelve-year-old Jed's parents have always expected quite a lot of him. For instance, making his way home from the middle of nowhere, armed with only a package of gum and some string. (Or maybe it was a lighter and a bottle of water? There were several instances...) Other than the quirk of tossing him into perilous situations and expecting him to survive, they have had some great times together.

Then one day, his parents disappear, leaving behind a mysterious note and an even more mysterious tunnel behind the dishwasher. Oh, there's a backpack, as well, this time with bottles of water and batteries in it. Also, a can opener....because, of course.

As Jed follows the instructions left to him by his parents, he comes to an incredible world made out of junk. Trash. Piles of it as tall and as far as the eye can see. Not only that, it's a world with its own people, currency, food, and pecking order. He is somehow supposed to find his parents in all of this?! His task would seem a lot more impossible if he wasn't used to thinking on his feet. Suddenly, a lot more of his childhood begins to make sense. Unfortunately, other parts have become even murkier. No time for much sentimentality now. He's got a job to do!

* * * * *
This world was so unique, yet I could picture it quite clearly. Memorable characters and fast-paced plot. Despite the near-constant danger of all kinds for Jed, there was an undercurrent of humor and wit that I enjoyed very much. Just when I thought I knew where it was all headed, the climax came along and surprised me. I love it when that happens!

Now here's the question: is this steampunk or just fantasy? I'm calling it steampunk, folks. No elves or fairies here! Just a whole lot of action-packed fun in a world of mechanical junk!

I'm ready for the sequel! 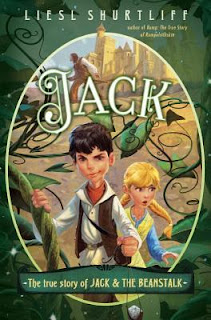 Jack: The True Story of Jack and the Beantstalk, by Liesl Shurtliff

4 stars: Another winner from Liesl Shurtliff!

Jack has always known that he was named after an ancient ancestor--Jack the Giant Killer--and as such, there are great expectations on him as well. People in his day and age don't really believe in giants anymore, though. Jack's not sure what to believe. Until the day the sky rains dirt and 2 giants come down, completely wreaking havoc of his family's farm. They take his father with them when they go, along with the entire rest of the village, buildings and all.

Jack knows what he has to do: he's got to live up to his name and go after the giants, so he can bring his dad back home again. He sells the family cow for some magic beans, and you know the rest. Or do you? ...

Jack and his feisty little sister Annabelle have some giant problems to face up in the land above the clouds, not the least of which is changing their expectations to reality. It could be that not all giants are evil bloodthirsty killers. Perhaps the giants may even have troubles of their own.

* * * * *
This isn't a story that gets retold very often--at least that I can think of. The original tale seems fairly straightforward--at least as far as fairy tales go--and you may think there wouldn't be much room for re-imagining things. Shurtliff proves that assumption wrong right from the beginning!

Jack is a troublemaker with a good heart. As he makes his way amongst the giants, both sides of his personality will be called upon to succeed at his task of reuniting his family. One of my favorite parts about the book was Jack's relationship with his little sister. There's sibling rivalry, mixed with actual caring, admiration, and bickering, just like many real-life sibling relationships I know (including some in my own household.)

I also liked that Jack found his own way to be a hero, separate from what his however-many-greats grandpa did. Different situations call for different types of greatness, after all. Also, it was fun catching the references to other fairy tales within this one.


* * * * *
Which of these have you read and liked? Do you have any middle grade fiction to recommend (since that seems to be my go-to choice lately)?

Have you ever gotten that funny feeling you've read a book before, because oh that's right--you have?!  C'mon, spill it!