What makes stories of true crime so fascinating?
I suppose for me it's a glimpse into a world that I had no idea existed, in my sheltered life growing up. Even as an adult, I prefer to look at the happier side of life, and believe that the world is full of good things happening, even if the news is irrevocably skewed toward reporting the bad stuff. (Sometimes I have to take a break from reading the news for my own sanity.)

I think part of the fascination for me is also just trying to figure out what makes these people tick. Why are they spending so much time and effort to do something illegal and damaging to others? Also, I like to find out if they've been caught. (Just a sidenote: I can not and will not read true crime related to serial killers or the like. I already know they would freak me out. I need to be able to sleep at night.)

Anyway, one niche of true crime that I keep coming back to is stories of wildlife smugglers. Did you know that millions of dollars worth of plants and animals are illegally smuggled into our country every year? It's hard for me to fathom. Truly. It's hard to stop, too--when murders and drug dealers are walking the street, it's hard to even get a sentence passed down for a suitcase full of baby turtles--but there are some good people out there working tirelessly to shut it down.

So, if you want to learn more, here are a few that I've read to get you started: 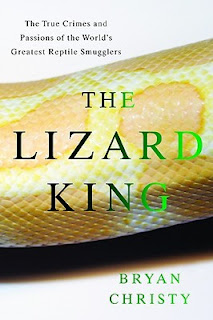 The Lizard King: The True Crimes and Passions of the World's Greatest Reptile Smugglers, by Bryan Christy

4 stars: Well-written, with many different aspects woven in to create a fascinating true story.

Christy investigates the multi-billion dollar industry of selling reptiles in the United States. In particular, the dealings of Michael van Nostrand and his company Strictly Reptiles, which supplies most of America's pet shops and dealers. It's a company that does a lot of legitimate business, but it is also up to its neck in the illegal wildlife trade and black market.

It's not just the story of an industry. It's also the story of Chip Bepler, the FBI agent determined to shut down the constant flow of smuggled animals, and van Nostrand himself, who rather reluctantly (at first) joined the family business, only to take it to new depths.

* * * * *
As with other books in this genre, I was angered and saddened by the way greed has powered the destruction of animal species and habitats around the world. Christy talks about reptile people almost as if they were a different sort than the normal human race. The way he describes it:


"Reptile people are on a trajectory from the time they are children: bigger, meaner, rarer, hot. . . Most reptile enthusiasts give up their hobby long before the hot phase, and some never feel it at all. Still, few who get into the reptile world as children do not long, at some point, for something exotic, something imported." (p. 6)

He explains that "hot" is slang for "venomous" but also can mean illegal. Perhaps that attitude lends itself to the high rate of crossover Christy describes between smuggling poisonous snakes to dealing in other illegal substances--like drugs. Apparently, of all the wildlife smugglers, pretty much everyone agrees the reptile guys are the worst. Most, if not all, are also involved in drugs to some extent, and have other connections to the underworld.

This makes me never want to buy a reptile for my child as a pet! Not that I had a strong desire to do so before reading this book. 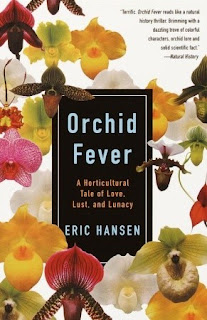 Orchid Fever: A Horticultural Tale of Love, Lust, and Lunacy, by Eric Hansen

Hansen delves into the world of orchids and those who love them, and finds it to be a rabbit hole of some depth, where things just keep getting curiouser and curiouser. He hears stories that seem unbelievable: armed men with dogs raiding an orchid nursery; orchid ice cream that you eat with a fork and can use as a jump rope; and sets out to get to the bottom of it all. He finds out all sorts of things, but the Truth, in most cases, remains a bit slippery.

* * * * *
I have one orchid on my windowsill, that continues to live and bloom despite lack of any special care whatsoever. After reading this book, that's probably where I'll stay in relation to orchids. A healthy distance seems wise.

Content: There's a chapter or so that compares orchid flowers to sexual organs and talks about the "lust" side of things. Um...just skip it--you won't miss much. 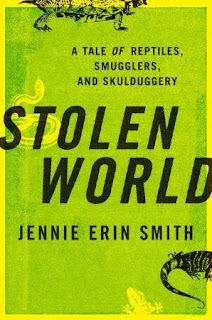 Stolen World: A Tale of Reptiles, Smugglers, and Skulduggery, by Jennie Erin Smith

Delves into the history of the reptile trade and those who have made and lost fortunes importing wild animals from other countries; particularly snakes, but also all kinds of others. Primarily follows the rise and fall of two main smugglers/importers: Henry Molt and Tom Crutchfield.

* * * * *
I find it fascinating and a bit mind-boggling that the American appetite for reptiles supports this type of subterfuge. 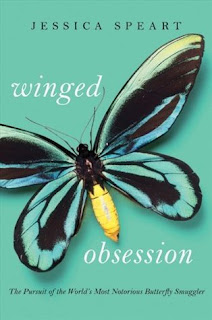 Winged Obsession: The Pursuit of the World's Most Notorious Butterfly Smuggler, by Jessica Speart

A new FBI agent takes on the kingpin of butterfly smuggling. Takes a disturbing turn towards the end when Kojima (smuggler) takes a sexual interest in Newcomer (agent) and becomes super needy/borderline stalker. Yikes.

I was a bit disappointed--though not too surprised--with the outcome.

Are you a fan of true crime? Any recommendations for me?