Snow, and Some of Its Uses 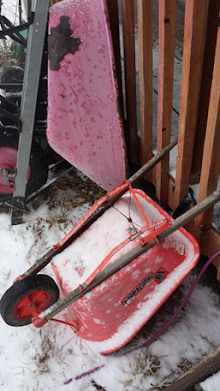 Right at the end of my last post I mentioned the difference in snow between this year and last. Namely, last year by this time there was none! That certainly has not been the case this year. As much as I want spring to hurry up and come already, I have to remind myself that we desperately need the water here in our desert state. Who wants to try growing flowers in a drought? Nobody, that’s who. 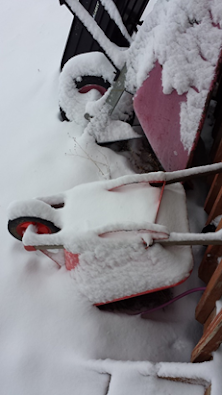 I’m recalling a poem about a red wheelbarrow, glazed with rain. So much depends on it, you know?

So what is all this snow good for, anyway, besides helping us out of a drought? For one thing, it can tell you where to plant your spring bulbs next year.

Ok, I guess technically it’s the LACK of snow that will tell you where to put in some bulbs. As we come inching along into spring, keep an eye on the areas around your yard that melt the quickest. These are great places to tuck in a few early spring-blooming bulbs. For instance, I have one very sheltered corner on the east side of our house that has been down to just grass almost all winter. It gets the sun and it’s protected from the wind. I am happy to report that I have already been planning to put a new flowerbed there come spring. (Actually, the new flowerbed was supposed to go in last summer, but got pushed to the bottom of my to-do list one too many times! This year, though, it’s going to happen!)

What I expect will happen, as it did in my Washington garden, is that any spring bulbs planted in that protected spot will grow and bloom much earlier than their counterparts in other spots in my yard, by as much as 2-3 weeks. It’s a great way to get the spring flower show to last a bit longer!

You can do this in your yard, as well. Just keep in mind that you’ll have to wait to mow that spot until all the bulb foliage has died off, if you want your bulbs to return the next year. In your lawn you will probably want to stick with the smaller bulbs, like scilla, puschkinia, crocuses, and possibly dwarf versions of some of the other bulbs, like dwarf irises and mini daffodils. I’ve noticed right along our sidewalk/front walk there’s consistently a thin strip of grass that melts off—probably due to the concrete absorbing the heat. 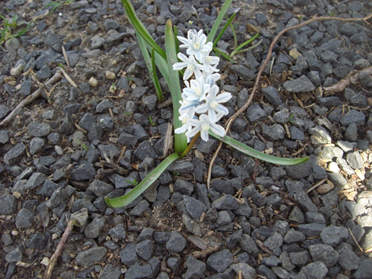 These are some scilla I had growing in Washington. They are so dainty!

This would be a perfect place to put in some scilla or puschkinia—little bulbs that would blend in with the grass, but give just a bit of something to smile about as you walked down that snowy pathway. The great thing about spring bulbs is that they can take the cold! If it snows again, it’s usually no problem for them. As soon as it melts off, they’re lifting their heads up again.

Anyway, another good thing about snow: it’s a wonderful insulator. I actually worry less about my shrubs and perennials surviving the winter when there’s a generous layer of snow on top. It protects them from drying winter winds, and it also protects them from the freeze-thaw cycle of snowless winters, which can lead to sunscald on shrubs and trees.

Sunscald is basically a sunburn on your tree. On a sunny winter day, sometimes the heat—either direct or reflected from the snow—can cause the bark of the tree to break dormancy, but once night comes again with its freezing temperature, WHAMMO! The newly “awake” bark tissues die. The dead bark looks ugly and can become an entry point for bugs or disease later on. So, not good.

Where was I? Oh yes, snow as an insulator. If the cold won’t kill your plant (which it won’t, since you have only planted things that can live in your zone, right?!), then the snow will definitely help it make it through the winter. In particular, I’m thinking about my roses out front that I wish I had planted deeper. Since the snow has covered them completely now, I guess I will stop worrying.

Finally, for those of you with little ones at home, nothing beats a snow day for fun outside play, followed by snuggly inside time. Right here on this blog, I’ve got a list of picture books to read when it’s snowy outside.