There's a Hole in My Lilac Bush (Dear Liza) 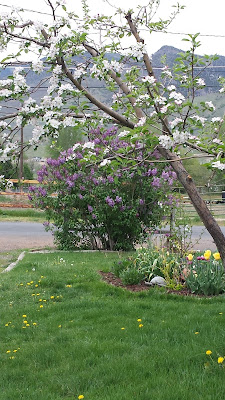 This was May of last year. It seems very far away right now! 6 more weeks, though. Yay!

Before the 6” of snow that we got last night and today, I actually had some time this week to get a few more of my spring chores done! One that has been on my list ever since we moved here was to get the lilac bush pruned. It is right in front, between the driveway and the…gravel place where my husband parks his truck. (Would that be the second driveway?) It is big and bushy and very hard to see past when you’re backing out of either driveway.

Besides, several of the branches looked pretty bad at the base, and were only producing flowers at the top ends. This brings me to the timing of my pruning job. Normally, you would wait to prune a lilac bush until the end of June—soon after it has finished blooming. That’s because lilacs form blossoms on current year growth. In other words, the flowers blooming this spring were formed last summer. So if you go about cutting off branches right now, you are depriving yourself of blossoms here in another month or so. However, I was doing what some call a “rejuvenation pruning;” essentially—taking out older wood to allow room for new growth. In order to do that, I needed to be able to see what I was doing! It was therefore quite helpful to do it now before any leaves unfurl to block my view!

The basics of rejuvenation pruning

Start with a flowering shrub that has grown long and leggy, has a lot of dead branches interspersed, and/or doesn’t produce many flowers anymore.

Each year cut 1/3 of older growth all the way down to the ground.

In 3 years your shrub will be brand new! (It will look much better in the meantime, too!)

** This works with lilacs, forsythias, spirea, mockorange, and probably others. Those are the ones I have done it on myself.

So that’s what I did. Except I probably took more like 1/2 of the bigger branches all in one go. I also had to lop off several of the smaller, newer ones as well, because they were growing so close to the oldies that I couldn’t even get my saw in there without cutting them off at the same time. 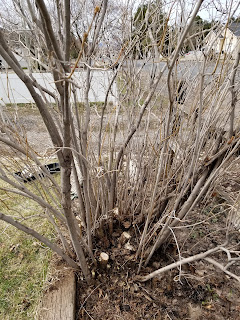 So yeah. There’s a pretty big hole right smack in the middle of the bush now. However, it looks the worst from this side—driveway view. Front or back views aren’t so bad! Besides, it feels so darn good to get those big lunkers out of there! Every single one of them was either diseased or causing problems with the younger, healthier branches.

There are 3 or 4 more along that right side that I wanted to chop pretty badly, but I’m making myself wait. They’ll go next spring for sure, though! 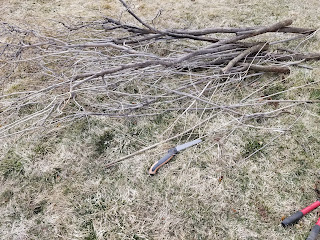 My handy-dandy folding pruning saw was a lifesaver for this project!

No loppers big enough for these guys!

I will be interested to see effect this pruning job has my lilac display this year. Even if it drastically reduces the blossoms, however, I am okay with that, because I know that next year will be 10x better!

I read something the other day that said you should prune out any lilac branches bigger around than your thumb. Well, as you can see, these fellows were more like as big around as my arm!

Glad I got this chore done before the snow. Once it all melts off again, I am chomping at the bit to get my flowerbeds all cleaned out, weeded, mulched, and ready for the growing season ahead.