So, as usual, it’s been a busy week around here. Here’s some of what I’ve been up to: 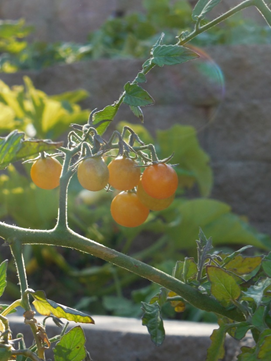 Sun Sugar cherry tomatoes, one of many varieties I started last week. Keeping my eye on the goal, here! These were grown in my Washington state garden.

First let me talk about the tomato and pepper seedlings. I learned this week that they are what you might call “fast breakers!” Meaning, once they come up, they really grow fast. Normally that would be good, but with my set-up right now it’s not. Here’s the deal. I’ve got my heat mat on a table in a different room of the house than my grow lights. This is a room we don’t use very often, hence the light isn’t even on in there most of the time. Not a problem for slow breaking seedlings. I water them at least once a day, especially when they’re on the heat mat, so I’m checking on them very regularly. Usually you don’t want to move them to the lights until about 50% have germinated. For the slower seedlings, once I notice that enough of them are breaking through the soil, I move them over to the lights to continue growing. Not a problem.

So I checked my baby tomatoes and peppers a couple of nights ago, and I had some coming up—YAY! There were still just 5 or 6 out of 20 per section, so I wanted to wait. When I checked on them the next day not only were a bunch more up, the ones that had already popped through the soil earlier were now 3-4 inches tall and pushing against the plastic dome! WHAT?! These are leggy seedlings! They’re stretching to find light. Darn it! You can always plant seedlings deeper when you pot them on to the next size, but 4 inches? That’s the size of the pot itself! Ug!

To be completely honest, I wasn’t sure what to do about it. They had already stretched, so it’s not like you can un-stretch them! After moving them under the lights and stewing over it for a day, I decided to just pull out those super tall ones and immediately planted a new seed in the same soil block. Not sure if that will work or not! These took less than a week to grow on the heat mat, so I’m hoping I still have time to sprout some new ones in their place.

Now they’re under the lights, which I have as close to them as possible (my trays are on wood blocks to raise them even closer) and… several of them have stretched out tall again. Sigh. I’m telling myself that they’re not as tall as those first ones. It could be a lie. The peppers are actually behaving better—they’re only slightly stretched. Say, 1 inch instead of 3 inches.

So much to learn with these seedlings!

Meanwhile, on a happier note, I got 2 trays of pansies potted up to bigger containers, and so far they are looking really happy and growing even bigger. Yay! My last tray and a half were still all quite a bit smaller—I’m wondering if they are the violas?—so I’m going to wait to pot them on to the next size up.

Note to self: I need to buy more pots to put all these babies in! Oh, and also—more plant tags! (The popsicle sticks I used all molded/rotted. Oops. Back to plastic, I suppose!)

I want to start hardening off the bigger pansies this week. It would be very helpful for them to continue growing outside, as it would free up space inside under my grow lights. That’s precious real estate right now!

Finally, the snapdragons I started are still very small and few in number, but I noticed yesterday that many of them have started to grow a set of true leaves. That’s very good! Last year my snaps stalled out completely for almost a month. These have at least made visible progress each week—seed leaves growing bigger, etc.—so I’m hopeful they will continue on. Last year a grand total of 5 seed-grown snaps made it out into the garden, and it was July before they were big enough, mind you. July! That’s way too late for the likes of them! So I am hopeful that these will be ready to plant out in a month or less.

The carnations are in the same boat—true leaves just coming.

We had a really nice spring day last week, that I unfortunately spent inside working feverishly on a marketing project: homemade seed packets as giveaways for a local business conference I attended. I made 60 of them! I’m proud of me. They were asking for 100 to put in the goodie bags given to each attendee, but at last count right around 55 people attended. For the win!

It was a fantastic learning experience for me. That’s business-speak for “I made tons of mistakes!” I really did, though.

Mistake #1: printing off the seed packet templates instead of just ordering some plain small envelopes and being done with it! Even with a paper trimmer, it took a really long time to cut out and glue together 60 seed packets. Especially because I wanted them to look cute, so I had extra papers I glued on, plus the seed-starting instructions. So much cutting and gluing! What a waste of time! They can’t be THAT expensive to just buy. See how much I am learning?

Mistake #2: I printed them off onto beautiful, medium blue paper…which made my information on the front of the seed packet hard to read. Not much I could do about that one after the fact.

Mistkae #3: I put the name of my business on a part of the packet that actually was designed to be a flap, so it got folded under and glued down! I almost gave up right then and there when I noticed that. Instead, I ended up including a business card in every packet, so that they would actually have all my info.

Need I go on? In any case, at least around 50 people have my information and 10 of my precious Bells of Ireland seeds. Maybe something good will come of it. I am actually impressed that I had that many Bells seeds. Plenty leftover, too! I think I would have run out before the full 100 packets, though.

Now to get mine planted!

So, the day after the business conference guess what? It started to snow! It has continued pretty much every day since. Hey—at least it is melting off by suppertime, now. Thank you April. This morning we woke up to snow AGAIN, but this time it melted off by lunch. So there is that, I guess. I was able to get out and plant my 9 new raspberry plants this afternoon, and even mulch the whole bed with pine needles to lower the pH.

Just so I don’t forget, I planted: 3 each of Amity Red, Red Latham, and Anne Yellow. 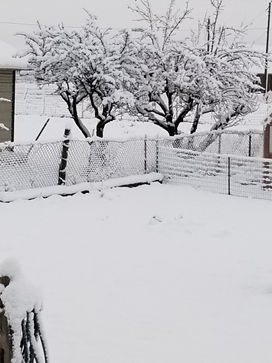 This was actually 2 weeks ago—but we woke up to the SAME thing this week! I did not take new pictures, because, well—here it is. Or here it was. AGAIN.

The list of things I did NOT get done continues to be longer than I care to think about,. Spraying fruit trees with dormant oil (must get on this one pronto—once leaves start to unfurl, it’s too late!), pruning, spreading nitrogen on the garden and tilling, etc. etc. etc.

Hey—speaking of planting and being in the garden today. Guess what? I found several seedlings out there that have popped up on their own. I can’t quite tell if they’re zinnias or sunflowers. They’re just getting their first sets of true leaves, but those are still pretty small. In any case, they must be very confused, because neither flower does well with cold weather! Now I don’t want to till, though, because I want to at least give them the chance to make it! Not sure what I’m going to do about that. (Scoop them into a pot until after tilliing? Skip that part of the garden? Just plow them under (gasp)?)

I’ve got several bunches of daffodils blooming in my front flowerbeds right now, and the hyacinths behind the greenhouse are breaking into bloom as well—albeit on very short stalks. So I did my first official harvest round of the year. Woohoo! It was so fun to be cutting my own flowers again! I’ve got a bunch daffodils on the verge of being ready—maybe for this week!

My plastic fork deer deterrent has worked for the tulips! So I am expected many more of those this year than last, as well. Did I mention that already? So what I did was take a bunch of plastic forks and stick them, tines up, around my emerging tulip foliage. So when the deer bend down to eat them—POKE ‘EM IN THE NOSE! Ha! Last year nearly every bunch I had got munched down to the ground, but this year they are looking strong and healthy—nearly 6 inches tall now. YES!

Also, the crate full of tulips I planted is finally coming up. That’s the last area to have snow, I realized, so I guess they’re just in a colder spot than everything else. I’m hoping it extends my tulip season out by a few weeks. The ones in the crate are nearly all parrot tulips.

So, what have you been up to this week? Have you had any “fantastic learning experiences” you want to share with me?