When speaking about the flower type of cosmos (ahem) is it ever singular, as in "cosmo?"
I had typed that first, but it just looked weird.
On the other hand, now my title has entered the realm of science fiction. Ha!

Actually, I have a book I could tell you about that--just kidding.
I can not think of a single science fiction novel that features flowers. Can you?
I think that's more of a fantasy thing. ANYWAY.

So, my cutting garden this year. Yes.
Such high hopes, like every year.
I planted my wildflower mix, plus other random seeds that were getting old, like scarlet flax and bunny tail grass, and zinnias. I did a few poppies as well, from new seed.
Well, I had all these volunteer cosmos popping up all over the place.
I must have pulled out 500 baby cosmo seedlings, from all over my garden.
Not kidding. Not even exaggerating--much.
Then I allowed a few to live within a very small space (2' x 3'), on the very end of my official cutting garden.

This is what I got: 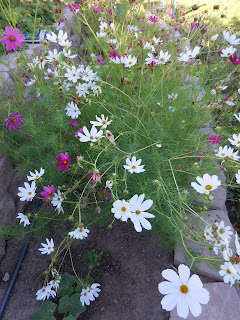 It's lovely--and I do appreciate cosmos, too, it's just--wow.
They have taken over!

At some point, I just stopped pulling them up, especially when it seemed like none of my other seeds were sprouting. The other day, I went searching within the Cosmo Jungle.

I found a few brave souls, trying to peek up: 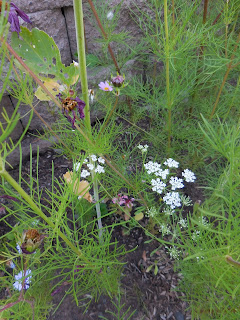 A little Queen Anne's lace.
Emphasis on the "little." 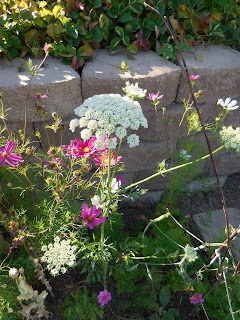 Oh look! A large Queen Anne's lace.
At least, I think that's what it is.
I could be totally making that up.
Anyhow, it's not officially in the cutting garden right there, it's in my youngest son's patch, but hey--I'm not going to be picky at this point!

The poppies I planted bloomed early summer, so that was fun.
For the week that it lasted.

I mean, it's not like I don't cut flowers from other parts of my garden.
This little cutting garden was just supposed to have a lot more variety.
Maybe next year, I guess.

So in the meantime, I have all the cosmos for cutting that I could ever want. 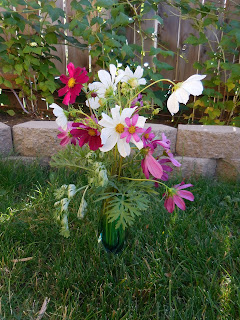 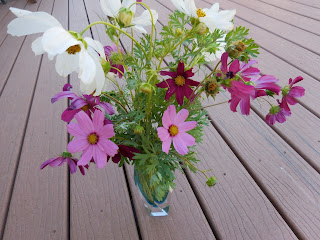 Sometimes, simple is good too.