The Hunchback of Notre Dame, by Victor Hugo 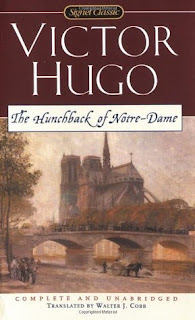 Do you know the basic story? I did not know much going in, beyond my fuzzy recollections of the old Disney version (which I only watched once, I think, because of the creepy priest.)

So there's a deformed hunchback named Quasimodo, who rings the bells of Notre Dame and is the ward of the archdeacon there. The archdeacon is Claude Frollo--more on him later. There is a beautiful, graceful, young, gypsy girl named Esmerelda, who dances and sings like an angel in the square down below. There's a poet and playwright named Gringoire who continually just escapes the noose, and Claude's younger brother Jehan, who is a thoroughly likeable scoundrel. We can't leave out Phoebus, the handsome, womanizing dirt-clod soldier. Did I forget anyone?  Oh yes. Crazy lady in the Rat-Hole. I can't remember her name at the moment. Plus a host of lesser characters.

Let's talk about Claude for a moment. Do you remember how scary he was in that animated film? Yikes! Times that by ten, and you'll have about how creepy he is in the book. He starts off well (before the book begins), by taking care of his younger brother once they become orphans, and later on adopting Quasimodo as a squalling foundling laid on the church bench. But as Hugo explains, over time he has grown bitter, disillusioned, and severe. Then he sets eyes on the enchanting Esmerelda and he is forever lost. It's a singularly unhealthy fixation. He stalks her, attempts to kidnap her (with Quasimodo's help), and just lurks. Then does something nasty and laughs about it. Yes, that really happens multiple times. Then he throws himself at her and when she refuses him, he goes even further off the deep end.

Understandably, Esmerelda is terrified of him. Plus she loves handsome Phoebus, who saved her from the kidnapping attempt. Claude finds out about this one-sided affection--it is simply a dalliance to Phoebus, who is engaged to be married--and determines to destroy them both.

There's a little incident with an enormous spider catching a bewildered fly that seems to sum up the entire story. Claude is convinced that he is the fly and Esmerelda the spider, while we all know that really those roles are reversed. Poor innocent Esmerelda, caught in the web of evil Claude Frollo.

The web first catches Esmerelda when the priest pays for Phoebus to rent a room for a tryst with Esmerelda. Then Claude hides (with Phoebus' knowledge) up in the attic space and watches what happens. (What?!) Things don't get too far, however, before he simply can't take it anymore and throws a knife at Phoebus, hitting him in the neck and nearly killing him. Unforutnately for Esmerelda, Phoebus certainly seems dead when the policemen come, and since she's the only other one there, and also is covered in blood, she's arrested for murder. The archdeacon is long gone by that point (of course). Well, it all goes downhill from there. Way, way down. Just when you think you've hit the bottom of the pit, it all slides just a bit more for good measure.

* * * * *
I had a hard time getting through the first 100 pages. There's several pages (chapters, even?) where Hugo describes the Paris of the time, building by building. It was excruciatingly tedious. Perhaps if I lived in Paris, or had ever visited, it would have been fascinating. As it was, it did nothing for me, except put me to sleep. (By comparison, I couldn't put it down for the last few hundred pages, just to find out what happened to everyone.)

Despite the downward spiral of the plot, there are glimmers of humor. Jehan, Claude's ne'er-do-well younger brother, provides a few of them, like this gem:


[Claude has just asked what he has come for.] "A little lecture on morality, of which I stand greatly in need," Jehan did not dare to add aloud, --"and a little money of which I am in still greater need." (Location 4430, Chapter 4 of Volume II.)

Hugo is a master of characterization. His characters are so finely drawn I feel sure I would recognize them on sight. Quasimodo, in particular, is a deeply-faceted character. Even with the abuse he has endured his whole life, he manages to love a few things deeply and even tenderly: the bells, Claude Frollo, and Esmerelda.  The fact that the only two people who have ever showed him compassion are such opposites is one of the great ironies of the book.

The part where Esmerelda has sanctuary in the cathedral and Quasimodo cares for her--even giving up his own pallet so she can lay on something soft, was really quite beautiful. A brief, much-needed reprieve before that train wreck of an ending. I was telling a friend about it last night, and she said, "You sound kind of traumatized." Yes, that describes it pretty well. Just don't get too attached to any of the main characters; that's all I'm saying.

Although the many tangents slowed the plot down considerably, I quite enjoyed one of them. Hugo talks at length about how cathedrals were the precursor to print. Prior to Gutenberg, he argues, the only outlet for artistic endeavors was architecture, specifically cathedrals--hence the sculptors made the gargoyles, the painters the murals, and the poet, the prayers. Then along came the printing press.


"All the life which is leaving architecture comes to it. In proportion as architecture ebbs, printing swells and grows. That capital of forces which human thought had been expending in edifices, it henceforth expends in books." (Location 3042 in my ebook copy, towards the end of the 5th Book.) [I miss page numbers.]

As a humanities major, this really caught my attention. I would like to delve into it further! I had never thought about architecture battling it out with print (and losing). Now we have the internet and social media, which may be the death of print at some point...as I type this for a blog post. What do you think?

Finally, I have to say it: Disney had no business making this into a children's animated movie!! It must have only a passing resemblance to the book, which included all kinds of kid-friendly ideas, such as:

racial and religious bigotry
torture
kidnapping
murder and attempted murder
public executions
Infidelity
Battle of the cathedral (many, many deaths)
Suicide
lustful imaginings (oh wait, they did put that in, didn't they!)

I'm not sorry I read it, but I'm definitely ready to move on to some lighter fare. Have you read it? Let's chat! There's plenty more to talk about.
Posted by Linnae at 8:00 AM