2 Middle Grade Novels: The Wednesday Wars & The War That Saved My Life

I had some good middle grade reading in January! I quite enjoyed both of these Newberry Honor winners. Just a coincidence that both titles mention war. For those of you keeping track at home--the second book counts toward one of my Reading Goals this year. Woohoo! 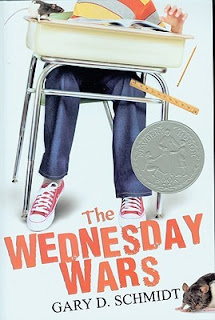 4 stars: Holling is a boy to root for!

Holling Hoodhood is the only one in his 7th grade English class that doesn't have to go to church school on Wednesday afternoons. His teacher has decided to make him read Shakespeare's plays and write about them--a sure sign that she has it in for him.

He doesn't begin to suspect any differently until he actually gets hooked on The Tempest--particularly the creative cussing involved. As his 7th grade years unwinds, though, he's got bigger problems than his Wednesday afternoons. He's on the hook to provide cream puffs for his ENTIRE class (long story), he gets roped into being in a Shakespearean play (as a fairy wearing yellow tights), classroom rats get loose escape into the air ducts above the ceiling, and his sister runs away with a hippie.

That's not all, but you get the idea. Life is not a bowl of cherries for Holling on his best days, but this year seems to be combining best and worst days at a dizzying rate. If he makes it out with his sanity and reputation somewhat preserved, it will be a miracle.

* * * * *
Oh Holling. Good hearted, a bit vulnerable; somehow keeps getting into what L.M Montgomery would call "scrapes." His relationship with his sister was one of my favorite arcs in the whole story, as was his rather rocky friendship with Doug.

His parents were awful. His dad put his business first, to the extent that anything happening in Holling's life was evaluated through the prism of how it would affect the business. His mom was mostly just defeated, I think, or possibly depressed--or both. It's a good thing Holling and his sister did have each other, because neither parent could be depended on for support.

Gary Schmidt is one of my favorite authors. His characters live and breathe. Though most of his books are geared for a middle grade or young adult audience, he doesn't talk down to them. The writing is superb. Characters that seem flat at first, become more complex over time as Holling gets to know them better. Believable situations and solutions. Evocative descriptions. It's all there. 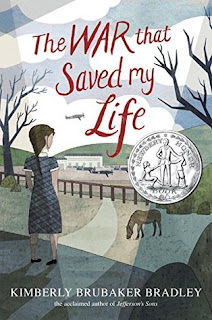 The War That Saved My Life, by Kimberly Brubaker Bradley
Newberry Honor, 2016

4 stars: Many layered and satisfying.

Ada's entire world is a small apartment and what (or who) she can see out the window. Her mother is so ashamed of Ada's crippled foot that she never lets her out where anyone can see her. Despite constant verbal abuse and near-constant physical abuse, Ada does her best to take care of herself and her little brother Jamie; although, as Jamie has gotten older he has taken to running wild in the streets rather than stay in the apartment with her.

When children are shipped out of London ahead of the Blitz, Jamie is scheduled to go alone. Ada, however, is determined to join him--without their mother finding out. With fierce determination on her part and an iron will to ignore the pain of her foot and leg, she and her little brother make it to the departure point. This short, excruciating walk is the most freedom Ada has ever known.

Once they arrive in the country, there's not a family willing to take in the two scraggly children. So a single woman named Susan Smith is conscripted to care for them. While she makes it clear that she is not happy with the arrangement, she still provides better care for the siblings than they have ever known. It's a hard adjustment all around, eased somewhat by Susan's horse that Ada takes to immediately and learns to care for.

Over time the children begin to feel secure and even loved, but what will happen when Ada and Jamie's mother gets wind of their new situation?

* * * * *
I enjoyed this book on many levels. I'm always interested to learn more about WWII. With her choice of protagonists, Bradley showed a different side to the children's evacuation of London than I had thought about before: namely, kids who were glad to get away and definitely better off in their new situations. At the same time, she showed what (I hope) was the more typical situation as well, with parents and children finding it terribly difficult to be separated. I didn't realize that as time went on and the bombing didn't start, many children went back to the city again, adding to the later tragedy.

Ada and Jamie's story itself was compelling and well done within the broader context. Particularly the way Bradley portrayed their rather painful assimilation into a much broader world than they had ever known, and the feeling of being foreigners, even though everyone spoke the same language. I loved seeing Ada's growth, and the way her view of herself begin to change from what her mother had ingrained in her. It was so satisfying to see her begin to internalize that she was a person worthy of love and not defined by her disability.

As a former (and hopefully future) foster parent, I can also relate to and admire Susan. Even with all of her own issues to work through, she still provided for these kids. Several things about their interactions rang true to me. Doctor's appointments, where old assumptions were cast aside giving new hope and fear at the same time, unexpected reactions (from the children) to seemingly ordinary situations, a gradual gaining of trust and beginning to thrive in a different environment than the child had ever experienced, and so on. The Christmas scene was heartbreaking and hopeful all at the same time: such a pivotal point in their relationships.

Content: Ada and Jamie's abusive home life was not glossed over. Also, there were several hints that Susan was lesbian, although it was never spelled out as such. I think kids unfamiliar with that lifestyle may not even pick up on it.

I would recommend it for ages 10 and up, with a trusted adult to discuss it with afterword.