If I Knew Then What I Know Now: End of Season Thoughts

By the way, yes I did get all those bulbs and trees planted.
Phew! Onward and upward!

Looking back at the last 6 months, it's incredible what I've learned this year.
First, I want to do a run-down of my flower crops:

By far, Best Field-Grown Flowers this year was a 2-way tie between Bells of Ireland and bachelor's buttons. 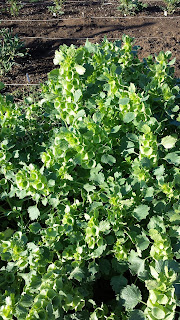 Bells of Ireland
I winter-sowed them (only 1 germinated), I planted a bunch inside (almost all germinated and most survived), and I direct-seeded a section of a row (I had around 6 come up.)
Despite the dismal germination rates outside, the direct-seeded did way better than any of the others. Once they started growing, they grew strong. Meanwhile, the ones I had started in the house, then hardened off, were weeks behind and never got as big in the end.

Even with all of that, my little patch of 8-10 total kept pumping out the flowers all summer long!
They were a staple in my weekly arrangements from end of July-September.

I loved the apple green color, then as they aged, they started turning a mottled eggplant color.
Beautiful ivory color when dried, however the blooms are rather fragile and pop right off the stems when dried, so I'm still figuring out the best way to use them now.

To change for next year:
1. Start them way earlier outside.
I have learned that Bells of Ireland are cool weather flowers--or at least, can handle cool weather. I didn't direct seed until first week of May. I want to direct seed March or April, and see how they do. Also, no winter sowing for these guys--they don't need it!

2. Use netting.
I didn't net them this year, and by the end of the season, most of them had such a curve on them that they were hard to put into arrangements. Also, the lower blooms got to be filled with dirt after every hard rain or sprinkler watering.

3. Don't bother cutting them to dry.
They dried just fine on the stem after a couple of frosts. Could have saved myself the trouble!

4. Always wear gloves when handling them!
I think the spines got more stiff as the season went on. I got a couple lodged in my fingers that hurt for several weeks. It's easy to peel off spines/unwanted blooms by pushing on them sideways, but watch out for those sharp points!

5. Don't buy any seeds. Bees loved these flowers!
I've just collected a whole bunch of seeds from this years' crop.

Let's talk about those Bachelor's Buttons!

Also winter sowed them (again, just 1 germinated), and direct seeded them twice (once at the end of April, and again a month later). I had around 30 germinate from the first round of direct sowing, and a handful more with the second. I spaced them 6" apart, which seemed crowded.

Like the Bells, this patch kept blooming all summer long and even lasted through the first frosts. There were really more than I could use or harvest. I discovered I liked them best in arrangements with very few leaves, if any. So I got to where I was stripping down the entire stem pretty much, before using them, which was time-consuming. Also, great for filler, but not a high dollar flower.
By the end of the season I was charging just 25 cents/stem.

To change for next year:
1. Rather than planting mixes, seek out single colors that I like and plant those in blocks.

2. Again like the Bells, BB are cool flowers, meaning they can be direct sown way early. I won't winter sow them (pointless), but try direct sowing even a month earlier, so end of March. As early as I can get out in the garden and work in the soil, they're going in.
Very curious to see how many reseed themselves, if any. I will also be on the lookout for those seedlings and transplant them into the space with the others if needed.

3. Space them 9-12" apart to give each plant the room it needs. See if it effects stem length.

Cosmos--several varieties
I used to have a cosmo jungle in Washington. Here, not so much.
I direct sowed them beginning of May and reseeded a month later.
Originally just 2 or 3 germinated. After a couple of wet days, I had 5-10 more come up.
So, I'm going for it much earlier this year.
I want to try starting them in seed trays in April, ready to plant out by early May, then cover them with frost cloth if a frost is predicted. I think they need that early moisture to germinate.

I did get a few weeks of some nice (though short-stemmed) cuts, before September frost completely took them out. I going to try some of the more unusual varieties, use the methods described above, and see if I can't get another jungle going! 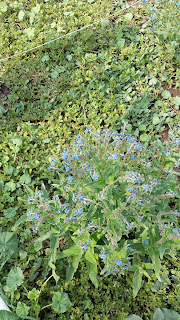 Cynoglossum, (Chinese Forget-Me-Not)
[That carpet of green in the picture? ALL WEEDS! UG! The blue flowers are the cynoglossum.]

After a slow start, I did end up with 5-6 of these plants that grew.
Tiny blue flowers.
Pretty, but I wasn't enamored with them.
Plus, the seeds stick to EVERYTHING!
That's why I decided this was a good ditch-bank flower. At the end of the season, I pulled them all up and scattered those sticky seeds along our back ditch bank.
If they come up, awesome! I'll use them. If not, no big loss.
If they reseed in the garden, I may transplant them over, or just pull them out.

Orlaya (White Finch Lace)
Another cool weather flower, that I started from seed too late (end of April.)
I had around 20 that grew, but the stems were very short and it was hard to catch the blooms at the right time to cut. I harvested maybe 20 stems from them, total. I think the issues were because of the heat. So this year I'll be starting from seed inside much earlier, and hope to have them transplanted outside by mid-April. I may try planting some later, in the shade, and see if they'll last through at least early summer for me that way, with some decent stem length on them.
I collected seeds from the ones I grew.

Snapdragon (Chantilly Mix)
I sowed them inside in early April. Had quite a few germinate, but then they just sat there for a month and half, not growing much at all. It took them FOREVER to grow! By the time they were big enough to put out into the garden, it was the end of July--probably the worst timing ever.
I had a grand total of 8 that I planted out. From those, I cut 4 stems.
These are, once again, cool flowers! They can take frost better than heat.
Next year, I'm starting them much earlier, indoors again. I'm going to try individual pots or soil blocks this time, instead of the broadcast sowing method.
Then I hope to get them into my garden by mid-April, like the orlaya.
I'm switching to the Rocket mix, which is supposed to be a prolific spring bloomer.
I may overlap with another variety to get them through summer. 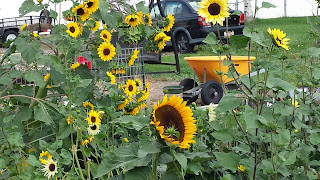 Sunflowers--several different varieities
I direct sowed all of these. It took awhile for them to germinate and get going, but once they did, I was inundated with sunflowers! These were almost all branching varieties, with pollen.
The pollen was a pain--it got everywhere!
Next year I'm doing all pollen-free.
Branching was okay--good because I could get more than one cut, but bad because the sunflowers took up the space all summer. With single stem varieties I could cut it once, then pull it out and use the space for something else.

Also, these didn't sell as well as I was hoping. I am getting some different colors this year--straight packets, no mixes--to see if that will help sales go up a bit.
I think I want to plant these closer together--the ones that came up a foot or more from any others had broomstick sized main stems.
Also, I want to try planting some day-length neutral varieties in a crate in my greenhouse in early April, to see if I can have sunflowers by June.

Zinnias--several varieties
I winter sowed these (none came up), and direct sowed a whole row, out of which approximately 7 germinated and grew. I cut maybe 6 stems from the ones that did grow this year.
Zinnias are supposed to be dead easy, so I need to figure out what I did wrong and fix it for next year! I did discover rodent tunnels under the far end of the row where I had planted these, but not sure if that's what happened to seedlings or if it was something else.

I want to try starting some in the greenhouse in the beginning of May, and see if I can't get some healthy transplants ready for the garden by beginning of June.


Next up: The Veggies!