Tales From the Orchard

I was trying to make this one sound like an L.M. Montgomery book. Ha!
Not quite.

So, the orchard.
I am sad to relate that it is dwindling.

We lost another tree this year--I believe it was a plum?
It was already the most sickly of the bunch, then when the Attack of the Aphids happened in early summer, it succumbed completely.
Cut it down and pulled up the roots, which weren't very big actually.
Maybe that was part of the problem.

Also, our sweet cherry tree experienced some die-off as well.
Specifically, the half of the tree that had been grafted in.
All along, there's been this crack where the graft didn't take right.
Anyway, this summer all the branches attached to the grafted portion died off. They were pretty good-sized, too, which was sad.
So I took out my pruning saw and hacked off half the tree.
This tree also suffered badly with the aphids.
I need to get some kind of spray or something for next year. They were so bad!!
We'll see if it makes it through the winter.

So as of now, we have 1 cherry tree, 2 apple trees, 2 peach trees, and 1 plum tree in the orchard itself, plus the big apple tree on the side of the house, and the 1-year old pie cherry planted in the oval bed.

Our best crop this year was:
APPLES! 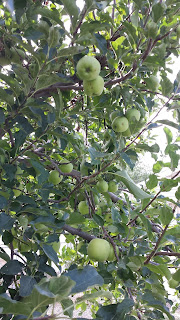 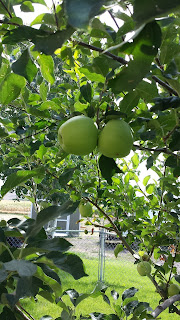 All from the side tree. The two in the orchard didn't even bloom.
This one, though, was loaded!
Most groups of the apples had 4-6 apples developing on them.
I went through in June and July and thinned them down to 1-3 apples per bunch, which noticeably gave them all room to grow to be full-sized.
Didn't spray this one, and there were some worms, so may have to look into that for next year.
The apples were very mild-flavored.
We harvested a couple of buckets, plus a big crate full.
I used quite a few as additions to applesauce with more tart apples, and the rest I ended up slicing, blanching, and freezing. 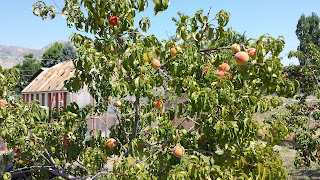 Both of our trees had a good number of peaches on them this year!
I should have thinned them the way I did the apples.

As it was, we ended up with a bucket full of very small peaches.
Tasty, for sure, but a pain to process! 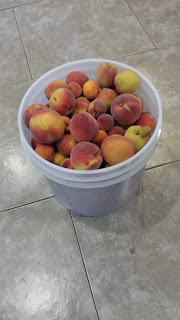 I'm trying to remember what became of them.
I think most of these from our orchard became jam, due to size. 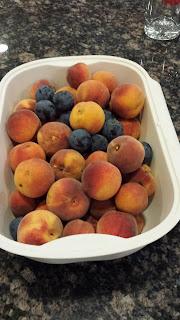 The plums were a gift from our  neighbor.
Peaches were ours. 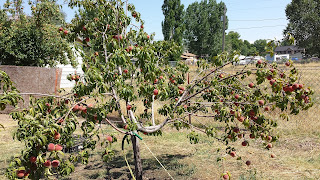 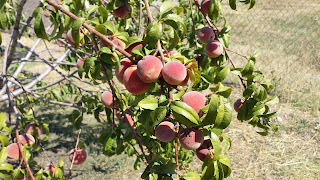 Look how beautiful they were!

Interestingly enough, the other peach tree didn't have nearly so many, but they were quite big.
Also, they ripened 2-3 weeks later than the smaller ones.
I was afraid I had missed the harvest window, because they were so bitter when we first tried them.
Nope, they sweetened up, but not until early September or so.
So, note to self for next year: leave them on the tree and don't worry about them!

Our plum tree didn't do anything this year.
Well, I take that back.
It lived. That was good.
It was looking great prior to the aphids, then it was touch-and-go there for a month or so.
Finally pulled out of it, but no fruit this year.

The pie cherry didn't make any noticeable progress, but I'm hoping it takes off next year.

Also, I've got to add in a little note about RASPBERRIES.
They have struggled!
I planted new starts this spring, trying to fill in the spaces where the ones from last fall didn't do anything. No luck there either. They all died.
So then I moved my raspberry patch--what was left of it--from the back of the orchard, to inside the garden proper, all along the fence. I had a few survive the summer. Not as many as I had hoped.
I got some free plants from a lady who was tearing out her whole flowerbed.
I dug up more starts from my dad's lawn (former raspberry patch), and planted them.
Still struggling to live, even with the regular watering in the garden.
I have never had this much trouble with raspberries!
Here's hoping they all make it through the winter with flying colors and actually grow big and tall and give me some berries at some point!

Still want to put in grapes and possibly strawberries.

So overall a mixed bag this year, but hey--YAY PEACHES!
Posted by Linnae at 7:00 AM