I am certainly no expert on seed starting, but over the last year and a half I have learned a lot! Yes, that is code for “killed lots of baby plants.” Last year my results were pretty dismal. I had maybe 6 Bells of Ireland that survived long enough for me to plant them outside, a handful of snapdragons, and really not much else. Oh, tomatoes. I did have some tomatoes that made it as well. 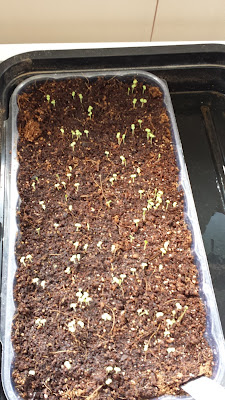 Snapdragon seedlings, last year. They germinated great, but only a few survived long enough to be planted out into the garden!

Nothing like setting the bar at ground level, eh?! Perhaps because of all that failure, I am thrilled with any progress that my plants make this year!

So, if you’re even more of a beginner than I am, let me share with you a few of the things I have learned that have helped my success rate go up. Some of it’s having the right equipment and some is giving them a chance to get used to changes.

This is not like baby chicks that have to peck their own way out of their shells to survive. In a humid environment, the seed casings slip right off of their own accord, usually. Without one, they don't. Simple as that.

The bigger seeds you can usually split with a fingernail or tweezers and gently pull them off. The tiny ones, though, like snapdragons? Forget about it! If they don’t come off on their own, that little plant is finished before it has even begun.

So, give them some time to get used to it all. A week to ten days is the usual. Start them off with just an hour or two of being outside in a sheltered, shady location. Gradually introduce them to stronger sunshine and longer hours.

I’ll tell you what—it’s the transporting them in and out that kills me with this one! In and out and in and out. If they are COOL FLOWERS, don’t worry as much about cold night temps killing them off, but do go slower on introducing them to full sun. For your warm weather lovers, do the opposite: take them in at night if it’s going to be cold, and maybe go a touch faster at exposing them to the heat and full sun. Keep them well watered outside, too.