A quick update on the winter sowing project.

Packing tape is garbage for these. Don't use it!
I went out and bought some clear Gorilla Tape, which was painfully expensive, but has been working much better to hold the two halves of the jugs together.

You should see some condensation on the insides of your jugs.
If you don't then they're too dry, and either your tape isn't sticking, or the weather has warmed up enough that you need to give them a little drink.
Well, mine from the first round didn't have any condensation at all, except the candy bucket, which had so much I was worried about mold. The weather has been unseasonably warm, but not warm enough to dry out the jugs.
So before I started planting Round 2, I took all the useless packing tape off the original jugs, got them watered again using the spray bottle, and replaced the tape with my new fancy-schmancy tape.
I also poked a few more air holes in the lid of the candy bucket.

Now for Round 2.
These were done Feb. 7, using the same methods as before.

I've got some big plans involving violas for Mother's Day, so I planted 2 jugs of violas.
Unfortunately, the seed was very old--somewhere around 8 years old.
I sowed it thickly, and will be happy if any of them germinate. 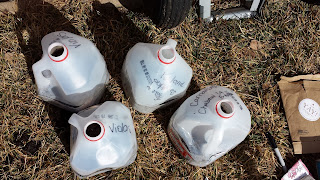 Then I did one of Carnations 'Chabaude la France,' since they take longest to flower out of all my seed packets, and another of Iceland Poppies.
You probably can't read the jug, but on that one I wrote "Iceland Poppies mostly." Ha!
I didn't get very many seeds in the packet for that one, plus I'm saving some seeds from each packet to start in the traditional way. Well, I had a bunch of loose seeds in the bottom of my seed box, which looked a lot like poppy seeds. They were small and black, anyway.
There's a fairly good chance that's what they are; I did collect poppy seed from my cutting garden 2 years ago in Washington.
So anyway, I sprinkled some of those in there as well.
We may get a surprise, if and when things come up. 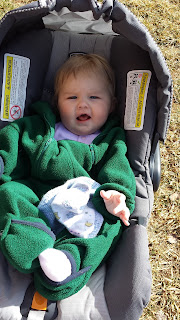 I had a little helper to keep me company this time around.
She was very patient until right at the end. :)

I'm still eager to find out how well this method works!
Also, I'm still saving up milk jugs.
I may do one more round before switching over to the other method.