The kids had a half-day of school last week, so we took the time to do some digging!

First, we harvested all the ripe tomatoes, and surprisingly, found a few more cucumbers and squash coming on. We had 3 scattered patches of carrots left--my daughter's, plus 2 in the family garden.
She dug up hers, and I did 1 of the 2 family patches. 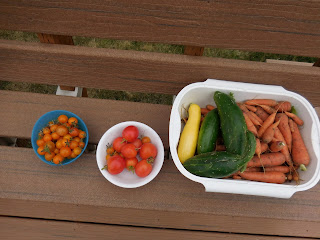 This week has gotten warmer again all of a sudden.
I may have to actually water the garden again this week!

I also harvested some seeds from my poppies in the cutting garden. 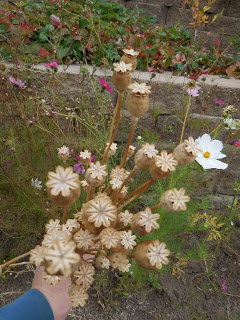 I love the poppy seed pods. They are beautiful in their own right.
They add some nice visual interest to flower arrangements, too.
These were each like little maracas--when I shook them I could hear the seeds rattling around inside.
I poured them out into a labelled envelope for growing next year.
I would love to have a whole big patch of poppies, of all different colors.
Wouldn't that be fabulous?
I also gathered some of the seed pods from the California poppies.
Saving seeds is fun and easy too!
Maybe I'll do a post on it sometime.

After that, I decided it was time to dig up the potatoes.
This is a lot of fun--in fact, potatoes are some of my favorite things to harvest. 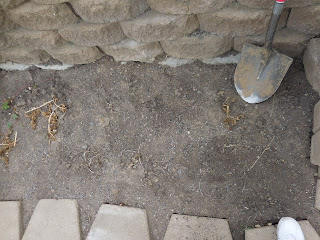 All the above-ground parts of the vines were dead.
It looked like bare ground. 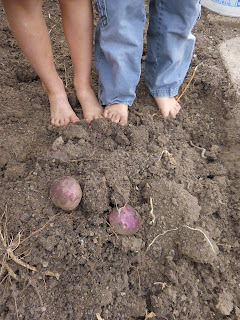 Look what was hiding under there, though!
[The kids have decided bare feet for potato harvest are mandatory.]
It's always so exciting to see those potatoes come up with the shovel! 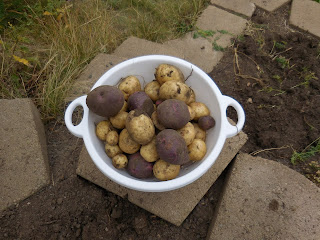 I didn't get as many as I have some years, but there was still enough to eat for awhile, anyway.
Those teeny-tiny ones are extra good in the crockpot with a roast.
Yum.
There are beets under the potatoes, as well. Not very many, not very big.

Slowly but surely, we're getting the garden cleared out!
It feels good.
Plus, after we were done harvesting the potatoes, my 4-year old got out his trucks and tractors and played in the dirt for 2 hours. Once things are planted, I don't let them step in the garden much at all--they have to stay on the blocks. I guess there's more than one reason to look forward to harvest!

What have you harvested lately?
Have you found any good dirt to play in?
Posted by Linnae at 8:00 AM