Last of the Summer Read-Alouds

I guess since school started last week, it's about time to get this post up! Our last installment of summer read-alouds were all sequels of books we had read earlier. 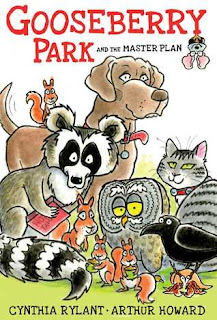 Gooseberry Park and the Master Plan, by Cynthia Rylant
Illustrated by Arthur Howard

4 stars: Kona, Stumpy, and the gang work together to save Gooseberry Park's animals from an awful drought.


There is a drought going on and all the animals in Gooseberry Park are suffering. Stumpy is worried about her babies--and all the other babies, too. If something doesn't happen soon to help, the weakest animals will not survive. What they need is a plan.

So the friends get together and come up with a bold plan. It's going to involve the firehouse dog, a cat, a possum, a couple hundred owls, drinking straws, chewing gum, and the big tank of water inside the fire truck (inside the fire station.) Many, many things could go wrong, but if they don't at least try, the animals of the park may not survive the summer.

A sequel to Gooseberry Park, though this one stands on its own. We enjoyed this one just as much as the first. It could start some great discussions on serving others, community involvement, friendship, and how to get an owl to help you. :) Murray the bat was our favorite character--he's so funny! 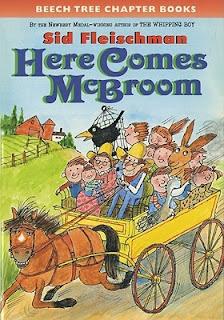 
In "McBroom the Rainmaker," there's a drought so fierce that the children have had to teach polliwogs how to swim--they had never seen any water! The skeeters are also the worst anyone can ever remember. McBroom comes up with an ingenious plan to take care of the drought and the woodpecker-sized mosquitos all at once.

I don't usually read ghost stories to my kids, so they were not sure what was up when we started in on "McBroom's Ghost." There's all sorts of trouble when a dry-bones starts mimicking all the sounds around the farm. Plus, Heck Jones--their hee-hawing scoundrel of a neighbor--has bought a whole bunch of razorback hogs, which he feeds by way of turning 'em loose on the McBroom's property. I have to quote one of my favorite parts:

"Well, I'll admit he was right about that. We fenced our farm, but those infernal hogs busted through and scattered the pieces like a cyclone. We strung barbed wire. It only stopped them long enough to scratch their backs. Barbed wire was a comfort to those razorbacks."

Makes me smile just typing it out! By the end of this chapter my kids were laughing (and relieved, I think!) Spoiler: it's not actually a ghost causing all the trouble.

When a cyclone sucks up every inch of McBroom's marvelous topsoil, he and the family follow it to see where it dumps it all. Unfortunately, the pile is so big and so far away, that they aren't going to be able to get it home without help. Along the way, they find all sorts of rare and unique creatures, including the Sidehill Gouger, the Desert Vamooser, and even the extremely endangered Great Hairy Prairie Hidebehind. Well, they try to find the Hidebehind. Problem is, it's always hiding behind you, so it's awfully hard to catch sight of. They end up starting "McBroom's Zoo" with all their marvelous animals--for a time anyway. Just long enough to make some cash, so they can hire help in transporting their topsoil back home again.

Another hit! Just like the first, McBroom's Wonderful One-Acre Farm, this one was filled with all kinds of colorful words like "gallinippers," "confounded," "flapdoodle," "hornswoggle," and "shoofly pie," among many others. Fun to read and fun to listen to! Not only that, this time around the kids could recite all 11 children's names with me! The stories themselves were short, self-contained, and satisfying.

I'm really glad I bought these two. We'll definitely be re-reading them again! 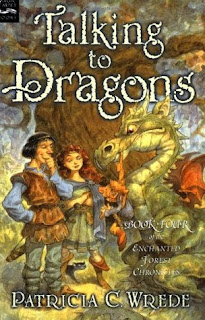 3 stars: Daystar is finally old enough to wield the sword--if he can figure out what he's supposed to do with it.

Daystar has lived with his mother Cimorene on the edge of the Enchanted Forest his whole life. She has taught him all kinds of rules for living near or with enchanted beings. Also, a whole lot about dragons, most especially, to ALWAYS be polite to a dragon--whether or not it is polite to you.

One day, a wizard shows up--who seems to know his mother, strangely--and Cimorene melts him. Shortly thereafter, she hands Daystar a sword and sends him off into the forest, with hardly a word about what he's supposed to do or how. Daystar is supposed to figure it out on his own.

Once he's in the forest, he meets up with a fire witch named Shiara, who has a trouble controlling her magic and her temper. Oh, she's also got a bunch of angry wizards after her, as well. They decide they would probably both be safer travelling together, while Daystar tries to figure out what in the world he's supposed to be doing.

First, I have to say it: Daystar is a dumb name. Setting that aside, we liked the story. It was good to have cameos by all of our old friends and enemies, including Morwen, Telemain, Kazul, Antorell, and of course, Cimorene and Mendanbar. Of the new characters, the jelly-like Quozzle was probably our favorite.

Like the previous two installments, this is the story of a hero's journey, so there's quite a bit of wandering, setbacks, and wrong turns. The ending was probably my favorite part, just because we finally got to the exciting battle between the wizards and everybody else. It was satisfying to have everyone all back together again at the end, too. (Wait, was that a spoiler? Sorry. You had to know it was coming, though.)

There were some things that bothered me (other than Daystar's name, I mean.) For one, the whole premise of the book is that no-one can tell Daystar anything about the sword or what he's supposed to be doing with it. Supposedly, because if he knows what he has, it will allow the wizards to find him and the sword right away. So Daystar spends pretty much the entire book bumbling around, with practically everyone he meets knowing more about his quest than he does. I prefer my heroes to be capable and smart, (like Cimorene, incidentally), rather than just happening to stumble on the right path through politeness and good fortune.

Secondly, Cimorene and Daystar's relationship was a bit odd. So, he's grown up with his mother telling him all this stuff for survival in the Enchanted Forest, but when it comes to his father, all we get is--it didn't come up. WHAT? And apparently, Daystar never pushed it, because let's be honest-- he's a bit intimidated by his mom. Again, what?!

I mean, Cimorene obviously still loved Mendanbar, and it seems there would have been a great deal she could tell THEIR SON without compromising the whole Plan to Defeat the Wizards. Also, I really can't imagine a teenage boy just letting that drop--no matter how much he loves/respects/fears his mother. Particularly in a (one assumes) otherwise loving relationship with his mom. He doesn't even seem to wonder very much about his dad. How did feisty, convention-breaking Cimorene manage to raise such a docile, passive boy? Just baffling.

Anyway, for me it was probably a 2-star read, but my kids liked it enough to bump it up to 3. We've also listened to all but the first now, and enjoyed that experience even more than me reading them.

For reviews of the others, follow the links: Dealing with Dragons, Searching for Dragons, Calling on Dragons.

As usual, we didn't read as many as I had planned this summer, but that's okay. For the most part, we really liked the ones we did read, and it's the positive experiences together with books that counts as much as anything. How did you do with summer read-alouds this year?