Reading aloud to my children is constantly evolving. Right now, as my oldest two have become avid readers on their own (yay!) I don't read out loud to them as much. Instead, we tend to do more parallel reading, where we both read the same book then talk about it. Or trading-off reading, where I read some of a story out loud, then they take the book and read it on their own for awhile, then I pick up from where they left off to read more out loud, and so on.

My read-aloud time with my 5 year old son is probably the closest to the traditional way. Since the beginning of the school year, we have read several chapter books together and stacks of picture books. What really warms my heart is when one of my older children will pull out a book and read to their younger sibling/s. 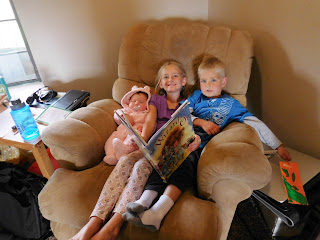 Here are some of our read-alouds from the past few months: 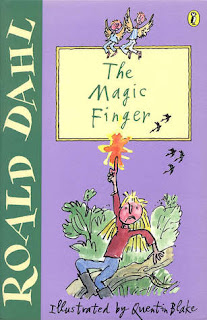 The Magic Finger, by Roald Dahl
Illustrations by Quentin Blake

The little girl who lives next to the Gregg's simply cannot stand their hunting. They shoot birds all the time, just for the thrill of it. One day she becomes very, very angry and turns her Magic Finger on them. The Greggs turn into birds. Will the lesson in empathy work? Will the Greggs ever become human again?

* * * * *
This was a short read-aloud. My kids enjoyed it. The premise was simple, but well executed. It was quite easy to imagine the whole thing happening. As with all Roald Dahl books, there was a slightly off-kilter sense of humor at work, such as when the Greggs attempted to make a nest.

It was quite gratifying to see how it all worked out in the end. The illustrations by Blake added quite a bit to the appeal of the story. 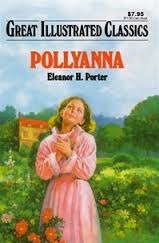 3 stars: I thought it was just okay, but my daughter liked it.

Polly is a rather severe woman, who takes no nonsense from her servants or anyone else. When her brother dies, she very grudgingly takes in her only niece, named Pollyanna. Even though Aunt Polly does her best to raise the girl with strictness and no affection, Pollyanna's positive attitude in every situation soon has the staff of the house jumping to her every need.

She makes friends everywhere she goes with her "Glad Game," from the invalid neighbor she goes to see regularly, to the grumpy man on the street whom she greets cheerfully every day. You see, her father always taught her that there was something to be glad about in almost every situation--sometimes you just had to look harder for it than others. Living with Aunt Polly would suck the joy right out of life for most people, but dear little Pollyanna even finds gladness there.

* * * * *
Did you ever see this movie? I did, a long time ago. I vaguely remembered it. That was my only experience with this story. I read this one with my 7-year-old daughter. I would read some chapters, then she would take it to her room and read more on her own as she had time. We finished it together.

The 3 star rating is the middle ground between our opinions. Here's what I had a problem with: the characters were all fairly 2-dimensional. They were mean (Aunt Polly), or loyal and sweet (servant girl), or glad (Pollyanna), and that was about it. There may have been other sides to their personalities, but we really didn't see them.

Also, I felt like the Moral of the Story was beating me about the face as I read it. Nearly every interaction between the characters seemed primarily a construct for showing one more example of how a positive attitude could make any situation better. Okay, okay! Enough already!

It did make me wonder how the full length book would be different than this abridged version.

Has anyone read the original? What did you think about it? 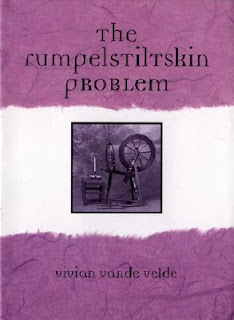 Rumpelstiltskin is a rather odd tale, if you stop to think about it. Vande Velde obviously has thought about it. Her conclusions led to this delightful collection of 6 short revisions of the classic tale.

I knew I was in for a treat when I laughed all the way through the prologue.

I found a copy of this one at the thrift store and snatched it right up! I was excited to introduce it to my daughter. First I re-read it myself. I still really liked it, though I think I would give it 4 stars rather than 5 were I to review it today.  Then I took it up to my daughter and read her the Prologue. After that, I left it with her to read the rest on her own. The stories themselves weren't all funny, but all were clever and came up with at least somewhat plausible reasons for the events of the story. We had fun discussing it after she was done.

How has reading aloud to your children changed as they have gotten older? (Or has it?)