The One and Only Ivan, by Katherine Applegate

So, let's talk for a minute about my goal of reading all the Newberry award winners from the past 5 years. It's looking like I'm not going to make it by the end of the year. My original plan was to post each year, complete with reviews, once I had read them. However, it's taking me quite a bit longer to read them then I thought it would. Between the move and our new library's 5-item limit for new patrons, I haven't checked out very many hard copies of library books this year. (Just a couple of weeks ago I was able to get my card switched over to a regular patron card, which comes with a 30-item limit. Finally!) I have not purchased them either, because what if I don't like them?

So. What I'm going to do instead is post the individual reviews as I go. Several of the years I have read most of the books and already posted reviews on Goodreads. Once I get a complete year done, I will do a new post listing all of the books and linking to reviews if need be. I know you are on the edge of your seats for that to come! 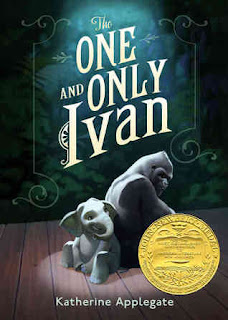 I just found out that it was based on a real gorilla named Ivan who lived in a mall, then eventually got moved to the Atlanta Zoo. (Yes, if you've read it, you probably already knew that.) That makes me like it more.