So, last year I had my cutting garden at the far end of the East-side terrace. 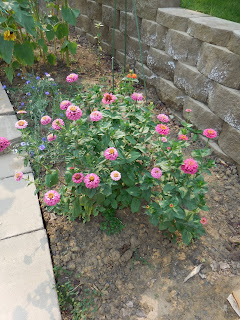 It was moderately successful, but left quite a bit to be desired.
This year, I'm putting the cutting garden up with the vegetables (hee hee!), so that left a big empty space down on the far end, there. 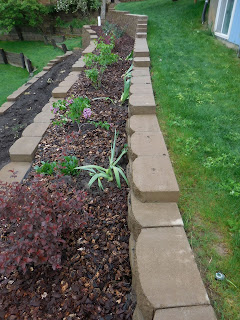 I just really like symmetry in my plantings, I've decided.

So, the shrubs already planted on this terrace were: ninebark, 3 lilacs, and another ninebark.
I decided to keep the pattern going, and put in 3 butterfly bushes, and a 3rd ninebark on the far end to cap it off.
The lilacs will bloom in the spring, then the butterfly bushes should bloom all summer. 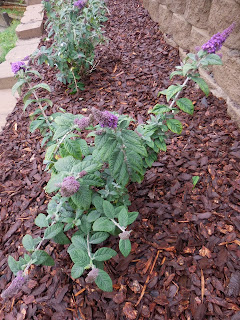 There's quite a lot of controversy surrounding butterfly bushes.
Many states have banned them outright, because they're invasive. (Here in Washington, they're banned on the west-side, but not here where I live.)
On the other hand, they're called "butterfly bush" for a reason--butterflies of all sorts will come for their nectar, and many "gardening for wildlife" type books and articles highly recommend them.

To help with this dilemma, breeders have come up with sterile varieties--that produce 2% or less seed as compared to the normal cultivars.

I asked the worker at my local nursery if these were the sterile kind and she said they were.
However, in trying to verify that, by finding them on some kind of list online, I have been unsuccessful, and the tag doesn't say anything helpful along those lines.
I guess next time I need to come with a list of varieties in mind.
Be that as it may, I have already planted them.
I will just have to be diligent about removing the flowers before they become seedheads.
I'm sure my daughter will help with that little chore! 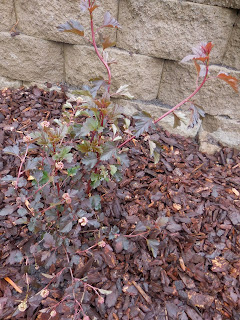 The other 2 Ninebarks are 'Lady in Red' cultivars, but I couldn't find any of that particular type this spring. I think this one will be similar enough that it won't stand out, anyway. 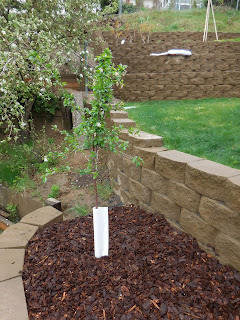 I knew I wanted a pie cherry tree, for a couple of reasons:
1--They are self-pollinating, so I could get away with just one.
2--They are generally a lot smaller than the regular cherry trees, so it would be a good fit for this terrace.
3--I picked a friend's pie cherries last summer, made some freezer pie filling and loved it!
I'm excited to see how this one does!

Yes, I'm going to remove the ugly white paper around the base.

Finished up by spreading mulch all around.

I'm happy to get this terrace finished off for now!