I had heard about The Time Warp Trio series for a long time, but had never read it myself. Then the other day at the library, my oldest son was asking what other series he could read, since he had pretty much exhausted all of his usual options. I picked up a bunch of these and away we went.

I have been reading through them myself, and they are great! Just like everyone has been telling me for all these years. (Sometimes it just takes a catalyst, you know? Like your own child wanting to read them.) 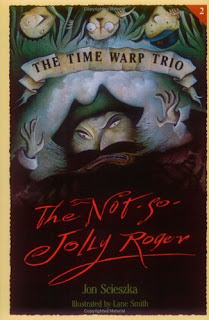 So the setup is a bit like Magic Tree House, if you're familiar with those books. There are 3 friends, Joe, Sam, and Fred, who are all at Joe's birthday party. He opens up a present from his magician uncle, "Joe the Magnificent," to find a book. A very strange-looking book with stars and moons on the cover, titled simply "The Book." They open it up and one of them happens to state a wish out loud--in the first book, it has to do with knights being real. A green mist envelopes the boys and they are transported to the time of Camelot. To get home, they have to find The Book in the place they've been transported to. 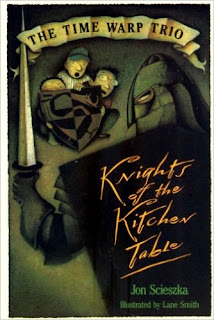 Here are a few things I like about them:
1. They're short. You're looking at around 60 pages and 10 chapters each. So they would make a nice bridge between the very short "Frog and Toad" type chapter books, and longer chapter books. There are also 2-3 illustrations per chapter which help break up the text as well.

2. They're funny! I was smiling most of the way through, and I'm not even the target audience. The boys make wisecracks and goof around throughout their whole adventure.

3. They're fast-paced. At least in the ones I've read so far, the boys are dropped into perilous situations right away and have several others come up as the story progresses. Of course, they always manage to defeat the [famous historical] bad guys/creatures.

I would say they are bit more geared toward boys. Of course the three friends are boys, and while there are women and girls in the books, most of the action centers around the boys. There's also plenty of gross humor--not bathroom humor, per se, but a lot of talk about how disgusting certain things/people are. For instance, in the Ancient Egyptian one, Tut Tut, the main evil priest is called Hatsnat, which is pronounced "Hot Snot." That gets no end of one-liners throughout the book. 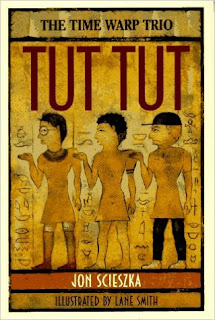 After I read the first, I had my son hold off so I could read it to all 3 kids at the same time. We just read the first one together yesterday, and they were all giggling. It took about 30 minutes to read the whole thing. Just perfect for the after-chores, pre-dinner time slot.

There are 16 of the original series. According to Goodreads, there's also a tv show, plus several graphic novels based on the tv show, a few full-length novelizations of the show's episodes, and even some written for the Easy Reader level.

Have you read these? Any particular ones that are your favorites?