The Emperor of All Maladies, by Siddhartha Mukherjee 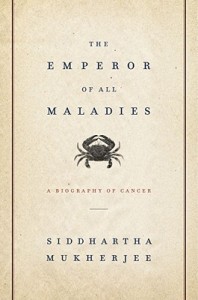 The Emperor of All Maladies: A Biography of Cancer
by Siddhartha Mukherjee

3.5 stars: Packed with fascinating details, grim facts, and people dedicated to helping others.


Mukherjee was an oncology resident as he was writing this book, which in itself amazes me. How in the world did he find the time?  It goes into depth on many aspects of cancer, including historical references to it, and the many people involved in reaching our current understanding of it.

The 1960's War on Cancer gets several chapters--along with the aftermath of that big push. The more hopeful news is that new drugs and new developments continue to be made--and made available--to the public relatively frequently these days. The not so great news is that even with all the progress that has happened, for many types of cancer, time left is still measured in weeks or months, not years. I thought it was very interesting that with some forms of cancer, being in remission at 5 years out is considered essentially a cure.

I wish I had a better memory for names, because this book was chock full of people: scientists, doctors, surgeons, patients, pharmacists, politicians, and so on, who all had a hand in some key discovery or bringing something important into the public eye. I do tend to remember stories, so some of those have stuck with me. I feel so sorry for the women who had radical mastectomies back in the day. Wow. The metaphor of war seems particularly apt in reference to the patients--the human casualties in this whole thing. Every new drug, procedure, or idea had to be tested on someone, after all. (Often the patients themselves were begging to be guinea pigs--grasping at straws.)

There was a couple of fascinating chapters on Big Tobacco, and the push for (and against) warning labels on cigarettes--how that all came about. It saddened me how loss of profits also seemed to lead to loss of ethics for so many in those companies, particularly those in charge. Or perhaps it just brought to the forefront the lack of moral integrity that was already there to begin with. Right now I just want to say that I am so glad I don't smoke!! So many cancers are a direct result of smoking and tobacco use. (Not to mention all the other health problems they cause.)

As a reading experience, it was dense and long. I had to read a few chapters, then put it down and come back to it in a few days. Great bedtime reading--though! Interesting enough that I wanted to keep reading it, but not so thrilling that it ever kept me up past my bedtime!  It was just about perfect in that regard. I knew I could read it until my eyes started closing on their own, at which time it was time to be done.

If you've got the time and the inclination, this is a good one! I really feel like I learned a lot.