The First Novel To Make Me Cry 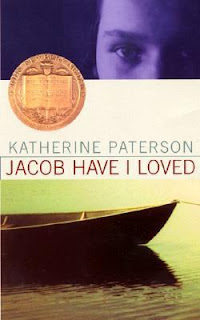 Jacob Have I Loved, by Katherine Paterson

5 stars: One of my all-time favorites!

Sara Louise or "Wheeze" has always been the less important twin, even though she was born first. Her sister Caroline has gotten everything, pretty much, from the time she was born as a sickly infant. Caroline is beautiful and has the voice of an angel, makes friends easily--she is the golden child, while Wheeze struggles along in her wake.

They live on Rass Island in Chesapeake Bay, where nearly everyone makes their living tonging for oysters or crabbing. Wheeze has her own little skiff that she takes on the water, and is able to contribute some to the family budget. Though her parents always thank her, it's Caroline who gets voice lessons, and Caroline who is the favorite. Wheeze can hardly contain her frustration and resentment.

Then an older gentleman moves back to the island, and Wheeze and her best friend Call, become friends with him. Slowly, things begin to change for Sara Louise, until she finally finds her own place in the world, out from under the shadow of her sister.

I first read this book when I was 8 or 9. I remember full-on crying at one point (I don't remember which part specifically), and feeling rather surprised at the same time that the story was affecting me that way. It was the first time I had a read a book that brought me to tears.

Since then, I re-read it every couple of years, and just finished it yet again a few days ago. It still got to me! Although, I think now I get emotional at a different point than I did as a kid. As I have grown up and had kids of my own, I have gained greater understanding and appreciation for the characters in the book.

I remember as a teenager reading it, and feeling so sympathetic to Wheeze and how unfair everything was to her. Now when I read it I still feel sorry for Wheeze, but I also see the broader picture of how her frustration affected her family, as well as the love her parents had for her despite how difficult she was. I guess that comes with being a parent. I can understand where the adults in the story are coming from a lot more, so it made sense that Caroline got the voice lessons, for instance.

This time around I gained such an appreciation for her parents! Hard-working, humble folk, who just did the best they could in every situation. I especially noticed how hard it must have been, having angry senile Grandma living with them, and yet they just carried on through all of that. Wheeze's mom didn't rail back when accused of being a loose woman and worse. She just quietly continued on. Wow.

Also, the way the Captain took Call under his wing was just heartwarming, as was the way he cared for the cat lady (can't remember her name at the moment), bringing love and dignity back into her life.

Also, I love the ending. It is just so fitting.

So spill it! Do you love a good cry as you read? What tearjerkers have you come across lately?