I'm slowly getting caught up on reviews here! These middle grade novels are quick reads, but it takes me the same amount of time to write a review for them as for longer books, so it's easy to get behind. Anyway...

Just to be clear, these two were definitely NOT read-alikes! Very different in tone, setting, characters--pretty much in every way, actually. 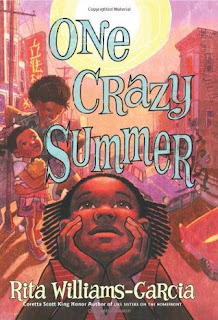 Delphine and her two little sisters are on their across the country to stay with their mother for a month. She left the family when the littlest, Fern, was just a baby. Delphine's the only one with very clear memories of her. Not one of them is sure what to expect--though Delphine's not getting her hopes up too high.

When they arrive, they certainly don't expect their mom to be so cold and distant. She absolutely warns them away from the kitchen, expects them to use the money they brought on food, and pushes them out the door in the morning to take care of themselves until bedtime. Good thing they have each other. Or to be more accurate, good thing Vonetta and Fern have Delphine to look after them--even though sometimes they don't want any part of her looking-after.

Cecile/Nzila (their mother) also "suggests" they attend a local Black Panther summer camp being held not far from her house--they serve free breakfast, after all, and she's sure not making any. The girls navigate the camp, the tricky relationship with their mother, and even the city itself (on one memorable day when they decide to do some sightseeing.)

I couldn't help but like these 3 sweet and sassy sisters. Their relationships with each other were so true to life! (Coming from one who never had sisters, granted, but I did have a lot of siblings!) They defended each other fiercely, but sometimes squabbled just as fiercely amongst themselves. They were best friends and best enemies all at the same time.

I also appreciated the perspective on the Black Panther movement in the 60's. That's something I don't know very much about, and this was a great introduction.

I have to say that I agreed with Big Ma's assessment of Cecile/Nzila, though. She was no kind of mother. I would not have sent those girls off to stay with her for one week, let alone a month! We got her story, eventually, and it granted me a bit of understanding of why she acted the way she did. That's great and all, but understanding her dysfunction doesn't mean her children needed to experience it!

I've had some experience with foster care. While I agree that children need to know both their parents, you do what you can to minimize the potential damage of the visits beforehand--i.e., keep them as short as possible--at least until the kids are old enough to take care of themselves. Now, these children did it, thanks to Delphine. Thanks to Delphine, they even got to eat some food for dinner other than Chinese food from the restaurant on the corner. Thanks to Delphine they were stood up for, encouraged, and kept out of harm's way. I wanted to give her a hug for being such a great big sister!

Several reviewers mentioned the humor--I don't remember it being funny, though Delphine as narrator was pitch-perfect. Maybe I was too bothered by Cecile/Nzila to notice.

Content: As mentioned, parenting styles (or complete lack thereof), along with the racial issues and history make this one you'll probably want to read with your elementary-aged child and discuss together.  Ages 10+. 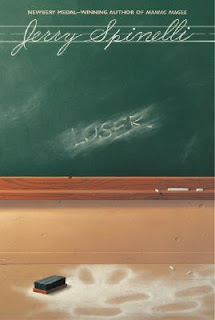 3 stars: A boy who is a little different runs up against--well--everyone else.

Donald Zinkoff is one-of-a-kind. He's kind-hearted and joyful. He is trusting and naive. He wants to be a mailman when he grows up, just like his dad. He's not good at sports. He usually has the wrong answer to the teacher's question. Most of the time, though, the negative things don't matter to him or affect his life. As time passes, however, the other kids at school label him a Loser. Labels start to matter more.

Then one snowy night, a little girl he knows goes missing from her house. Zinkoff makes it his personal mission to find her, even though it's dark and cold and still snowing. Can one heroic act redeem him in the eyes of his classmates?

As he did in Stargirl, Spinelli gave us a birds-eye view of one irrepressible kid who just couldn't manage to fit in. Not that Zinkoff tried to fit in--very often--but even if he had tried his hardest, it wouldn't be possible. Zinkoff was his own person through and through, and no label would change that completely.

The story follows Zinkoff through elementary school, showing the gradual change from other kids not noticing Zinkoff's idiosyncrasies, to those same traits becoming all that they noticed. The ending was not neatly tied up in a bow, which I appreciated, because that would not be realistic. It left us a glimmer of hope that things may get better for Zinkoff at school. Possibly.

Mostly though, it made Zinkoff a real, loveable, flawed person--which was probably the point. There's always a person behind the label, someone we may very well like and even admire, if we really knew them.

I enjoyed it, but I don't know if kids would. It's long on character and short on plot, so I don't know if they would stick with it unless assigned to read it. Also, the cover should probably be re-done; it's a bit dated.

Have you read either of these? What did you think?
Posted by Linnae at 8:00 AM