Guess what?! We harvested our apples last week!
It took less than a minute. 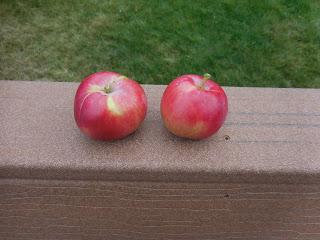 There they both are.
Beautiful, aren't they? :)
So, all along I thought that tree was the Golden Delicious tree.
Um...apparently not!
In a way, I almost didn't want to pick them, since they had managed to withstand June drop, hard winds, bugs, and children.
They were good! We had them for dinner one night and everybody got to taste them.

We went up to a u-pick orchard fairly close by (40 min. drive) to make cider and pick apples.
I thought we would just pick enough to eat fresh, since we still have some applesauce from last year.
(And since our own harvest was--ahem--not as bountiful as we might have hoped.)

Then--the orchard happened.
It is impossible to pick just a few when you're surrounded by trees loaded with fruit, the branches nearly touching the ground. We just couldn't do it. 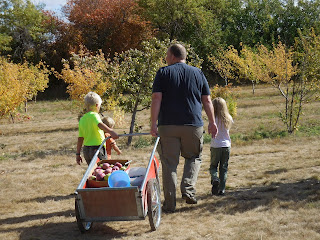 So we picked Golden Delicious, MacIntosh, and Cortland apples by the armload.
We were able to restrain ourselves slightly more with the pears and plums.
The kids had to try every kind.

Looks like it's going to be an applesauce year after all!
We had to ask for extra boxes, since we had filled up the one I brought! 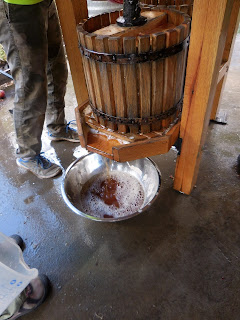 4 gallons of cider later, we were ready to go!

* * * * *
As you probably noticed, the pears were already very ripe, so they had to be done first.
So far I've made 1 more double batch each of Pear Pineapple and Pear Plum jam.
I'm still figuring out what to do with the rest of the plums.
There's a recipe for Freezer Plum jam that looks intriguing.

Meanwhile, I've got 2 boxes of apples in the garage!
I'm going to have to schedule in a day for applesauce sometime in the next few weeks.
Preferably on my husband's day off--large scale applesauce making goes MUCH better with at least 2 adults.

Have you been to any orchards lately?
There was one I used to go to in Illinois that always had apple cider donuts for sale.
They were pretty much the best thing ever!
Posted by Linnae at 8:00 AM